Figure 11-1: The Ryde – Sevel area. The digital elevation model of the area shows various surface features that are superimposed on the overall shape of the terminal moraine.Photo:Geopark Vestjylland

This site is a 5 x 5 km area east of Struer between the small towns Vinderup, Ryde and Sevel. It is part of the moraine landscape that dominates the northern part of the geopark land areas that was formed in connection with the main glacial advance and its melting. The area comprises the top and northern flank of a broad, ENE-WSW ridge that reaches up to 89 m above sea level - amongst the highest points in the geopark. To the south the landscape slopes down to the MSL (site 5 Salshøj - Sønderhede). To the west and east the site is bordered by tunnel valleys at Hellegård (site 15) and lake Stubbegård Sø (site 16). The marked ridge at this site is about 20 m above the landscape immediately to the south, and reaches 89 m above sea level at the summit of Ryde Bavnehøj. To the north the landscape falls more gently to 20-30 m above sea level over a distance of 3-4 km (Figure 11-1).

The Ryde – Sevel ridge is interpreted as a terminal moraine formed by a re-advance following the Main Advance, and it is one of a series of terminal moraines formed by re-advances behind the MSL (site 17 Lomborg – Bonnet - Heldum; site 7 Nørlem - Nørre Nissum; site 8 Bjerrum Arch; site 6 - Toftum Bjerge; site 9 Breinholt Arch; site 10 Gimsing - Handbjerg). 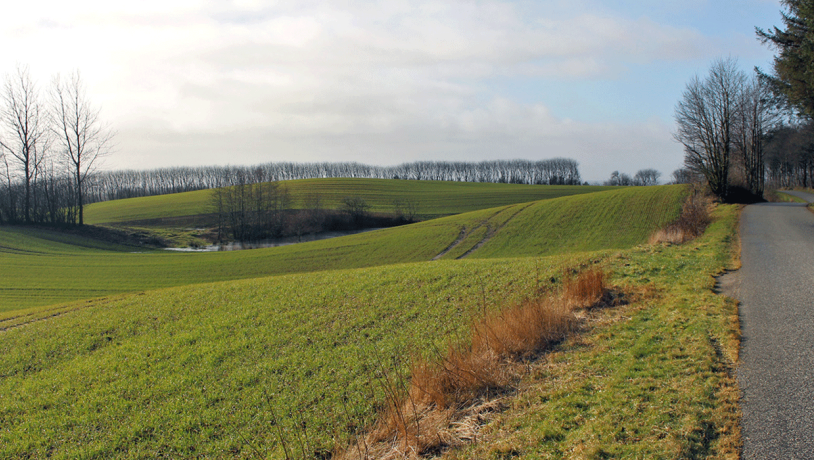 The terminal moraine here is distinguished from the others by its large size combined with the fact that the overall topography is superimposed by several other landscape features. On the top of the ridge there is a row of small, irregular, elongate hills separated by depressions that have no natural drainage channels. The difference in elevation between the tops of the hills and the bases of the depressions is typically about 10 meters. The irregular hills are 200 - 400 meters long and follow the overall length of direction of the ridge. The depressions between the hills are water-filled or hollows with peat on their floors (Figure 11-2). North of this area on the top of the ridge the surface is covered by smaller elongate hills and closed hollows. These are typically lower, more irregular and the orientations of their long axes are more varied than those on the top of the ridge. Furthest north the elongate hills again reach lengths of 200 - 400 m but they are lower and are extend NW-SE; the landscape here is gently undulating.

All of these landscape forms bear witness to a complex history of formation during melting of the glaciers whose re-advance was responsible for the overall shape of the terminal moraine. The area with elongate hills and intervening hollows indicate that dead ice played an important role during the melting process. Comparison of this locality with the other large moraine in the area (site 7 Nørlem - Nørre Nissum) gives insight into the large variation in landscape forms that can develop during the formation of a terminal moraine and the subsequent melting of the dead-ice left behind in the glacial landscape. The many bogs and small lakes in the area are protected by Nature Conservancy Law § 3 (protected types of nature).