Undulating moraine landscape with dead ice features and a terminal moraine formed as a result of glacial re-advance. 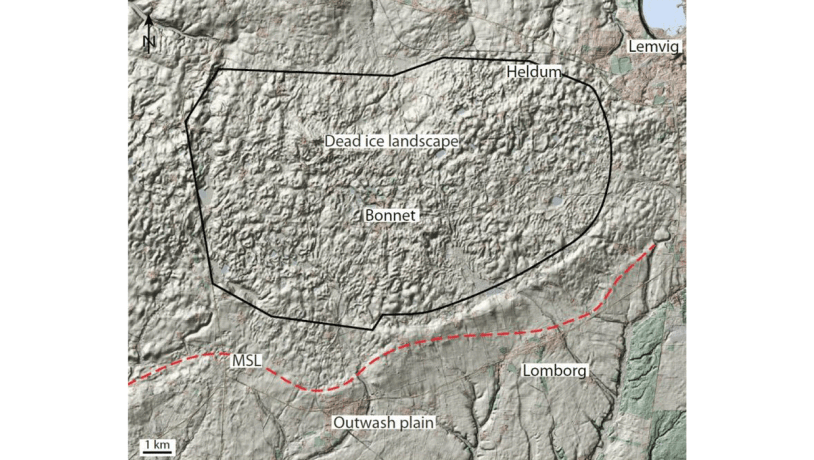 This locality comprises an area located about 3 km east of the North Sea coast at Bovbjerg (site 1); Heldum is in the outskirts of Lemvig. The site is just north of the MSL that marks the limit of the Main Weichselian Advance 23.000-21.000 years ago, described under site 2 (Lomborg). Throughout the geopark the area north of the MSL is dominated by moraine landscapes that were formed by various glacial processes: i) partly during glacial advance to the MSL, ii) partly during melting where deposition took place on top of dead ice left behind when the ice melted. The Lomborg - Bonnet - Heldum area is a good example of an undulating dead ice landscape with small hollows formed on a till plain during melting, and with a terminal moraine formed as a result of glacial re-advance (Figures 17-1 and 17-2). 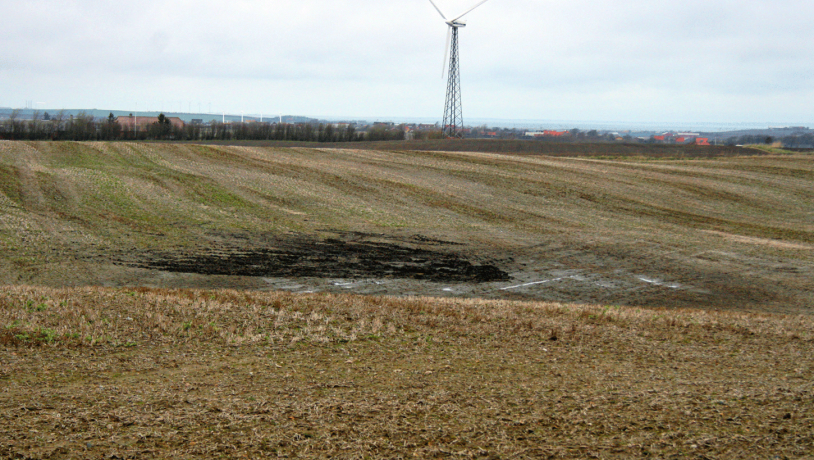 Figure 17-2: The dead ice landscape in the central part of this coloured digital elevation model is limited to the south by the Main Stationary Line (MSL) (dotted line) and to the north by a terminal moraine (dash-dot line) formed by a re-advance of the MSL glaciers.Photo:Geopark Vestjylland

The dead ice landscape immediately behind the MSL at Lomborg - Bonnet - Heldum has irregularly distributed small depressions and low hills with a relief of 5-10 m. The distance between the depressions varies, but it is generally between 100 and 500 m. For example, in the south-western corner of the area there are five small water-filled depressions within a distance of only 500 m. The subsurface deposits are mostly clayey till, but particularly in the eastern part there are areas with meltwater sand and clay. Many of the small depressions are dry as a result of draining for agricultural purposes. Old maps show that many of the depressions used to be filled with water, which is also evident from peat deposits on their floors. The peat formed in small bogs where sphagnum could grow. 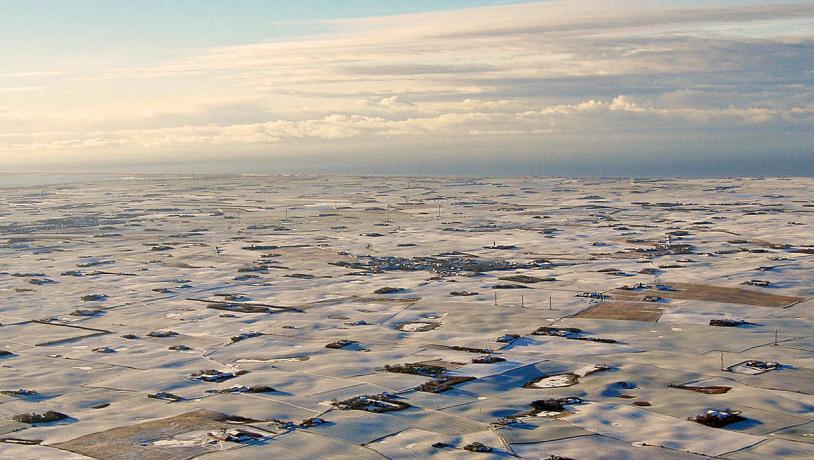 This kind of landscape with many depressions with no natural drainage and isolated small hills is a typical dead ice landscape (Figure 17-3 and 17-4). It formed when the ice responsible for the MSL melted. The ice, which was partially covered by sediments, melted slowly and unevenly. This resulted in the isolation of lumps of dead ice that melted slowly. Clay, sand and gravel that were previously carried in the glacier or provided by meltwater were deposited between the lumps of dead ice. When the dead ice finally melted, small, often water-filled, depressions appeared where the dead ice had been – kettle holes - whereas the sediments deposited in hollows in the dead ice resulted in kames. 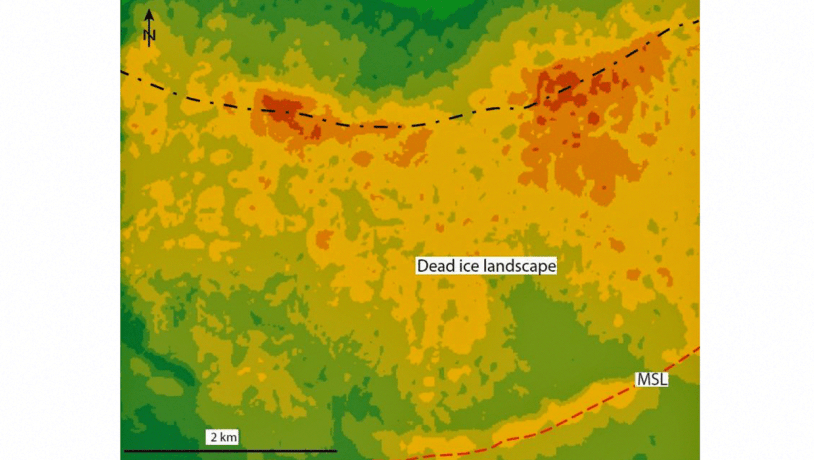 Figure 17-4. Aerial view showing many kettle holes. Several of them are water-filled and were previously lakes or bogs.Photo:Geopark Vestjylland

North of Bonnet the landscape rises by about 8 m over a distance of 200-300 m and forms a roughly 5 km long ridge parallel with the terminal moraine of the MSL at Lomborg (site 2). The southern flank of this ridge is covered by a series of small depressions and minor hills that make the ridge difficult to recognize clearly. The northern flank is more evident and falls about 15 m over a distance of 200-300 m. The ridge is a terminal moraine that formed as a result of a glacial re-advance after the ice responsible for MSL had retreated somewhat, and while the area in front of the ridge was covered with patches of dead ice. North of the ridge there is another area with small depressions and hills up to 5 m high, typical features of a dead ice landscape (kettle holes and kames).

The numerous bogs and small lakes are protected by Nature Conservancy Law § 3 (protected types of nature). Before it was drained the area was dominated by heathlands and small marshy areas with small fields. There are several widely spread small farms. Larger farms along the MSL (site 2 Lomborg) had stakes in the common land in the area.