Outwash plain in front of the junction between two lobes in the Main Stationary Line.

This site is located about 6 km east of Holstebro and covers an area of about 6 x 4 km. It includes the MSL. The site borders Hellegård tunnel valley to the west (site 15) and lake Stubbegård Sø – Flyndersø tunnel valley to the east (site 16). The locality is a splendid example of the relationship between the course of the MSL and the landscape in front of it. The overall course of the MSL through the geopark is east – west, but it is composed of a series of curved sections that reflect the presence of glacier lobes along the MSL. The junction between lobes is commonly where a tunnel valley is located, such as at Lem Vig (site 13) and Kilen – Hornet (site 14). Salshøj – Sønderhede is an example of a locality where two curved sections of the MSL meet without being associated with a tunnel valley. 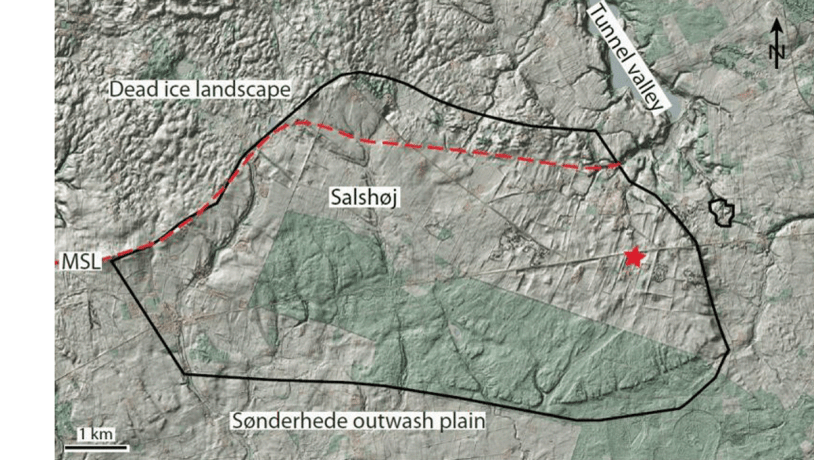 There is a boundary between two types of landscape in the northern part of the area that separates the hilly, rounded moraine landscape to the north from the flat, slightly sloping surface consisting of meltwater sand and gravel in the rest of the area. Along the boundary there are local small hills up to 3-5 m high, but the boundary is most evident by the overall change in the type of landscape. This otherwise smooth boundary - the MSL - makes a break at Salshøj (Figure 5-1, 5-2).

Immediately south of the break in the MSL the landscape dips down to the south in a fan shape with its top point at the break and with a fall of 20 m over a distance of 1 km. This fan was formed when meltwater flowed from the glacier over the area in front and deposited its load of sand and gravel in step with its gradually decreasing rate of flow, and therefore its waning ability to transport material. The location of the top point of the fan at the break in the MSL shows that meltwater from the glacier flowed out just here. There are several similar outwash fans associated with tunnel valleys in the geopark, such as that at Rom (described under site 20 Klosterhede - Kronhede). There is no tunnel valley at Salshøj so we do not know whether the meltwater flowed over, through or under the glacier.

South of the head of the fan at Salshøj the area has a flat surface that generally slopes with a fall of about 10 m over a distance of 4 km. In the central part of the area the slope is towards the south. In the eastern part of the area, nearing the valley described under site 16 (Stubbergård Sø - Flyndersø), it slopes away from this valley (i.e. to the SW). Similarly in the western part of the area it slopes away from the Hellegård tunnel valley (i.e. to the SE). The outwash plain was therefore formed from meltwater deposits from the source at Salshøj as well as from both of the glacier portals of the tunnel valleys to the east and west. 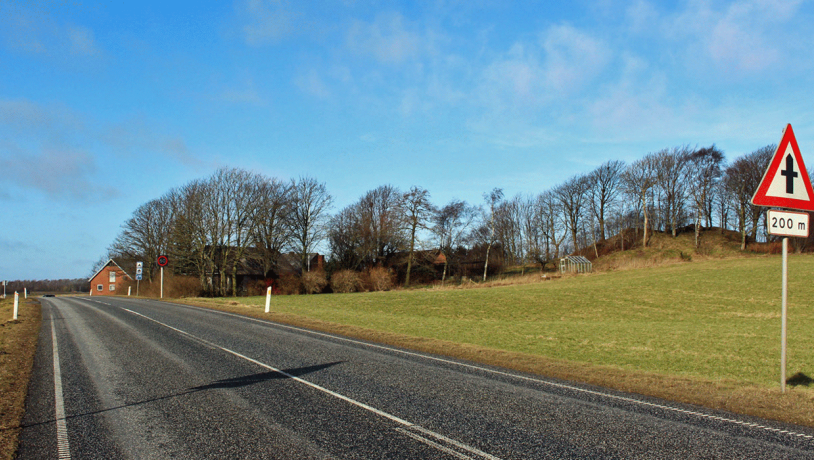 A marked circular depression with a diameter of 30 m and a depth of 6 m is located just south of the road about 1.2 km west of Bjergby. This is interpreted as a sinkhole formed by dissolution of the chalk that forms the subsurface here. Røverstuen (Robbers Room) or Taterhul (Gypsy Hole) as it is called was conserved in 1984. The outwash plain has long been subjected to excavation for gravel which has resulted in lowering of the surface. The sinkhole area therefore appears to be raised relative to the surrounding excavated surface. The area has been extensively cultivated and there are several plantations.