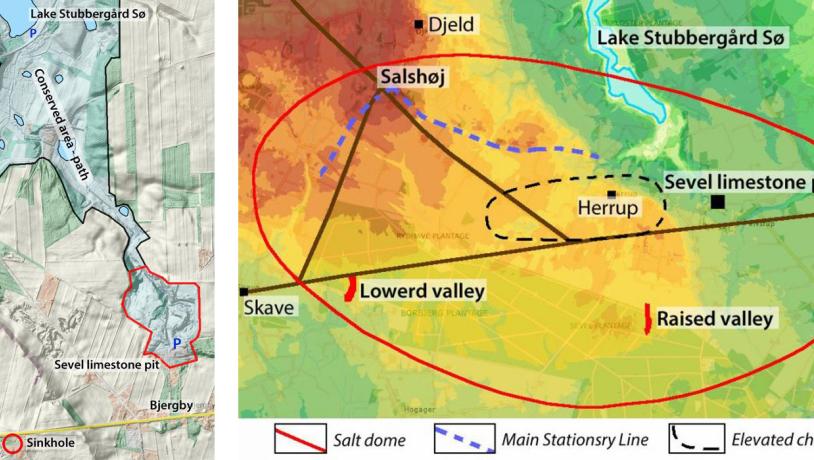 Left: Figure 45-1: Sevel limestone quarry with the connected preserved area to the north. Right: Figure 45-4: Digital elevation model showing the extent of the Sevel salt dome below the surface (black line); this is the area that can have been topographically influenced by movement of the salt. The area in which the limestone is near the surface is marked by a blue circle. This usually represents the top of the salt structure. The Main Stationary Line can be followed further to the east; here it has been eroded by the Karup river that flowed northwards.Photo:Geopark Vestjylland

Sevel Limestone Quarry is located a few 100 m north of the road between Holstebro and Viborg at Bjergby. This is a large abandoned limestone quarry that contains the ruins of several limekilns (pot-shaped kilns) and a sizeable ring-shaped kiln. The site includes the limestone quarry itself and the former plant area with the kilns (Figure 45-1).

This site contributes to our understanding of the evolution and dynamics of salt structures where it has been demonstrated that activity has continued right up to late glacial times. The Vejrum salt structure (site 44), on the other hand, provides information on processes at a deeper level. It has also been demonstrated that the topographic expression of the Sevel salt dome has influenced the movement of the ice (as was the case at Odby Klint: site 42). This leads to a more general topic; to what extent has there been interplay between the underground salt structures in the region and the movement of glaciers through the ice ages? A concrete example is the detailed relationship between the salt structures and the shape of the sea that formed in the Holsteinian interglacial period. This in turn led in the long run to the shape of the western part of Limfjord (site 6 Toftum Bjerge).

The limestone quarry and plant area are accessible to the public. The limestone quarry has been conserved together with a tributary valley to lake Stubbegård Sø. It is therefore part of a large protected and maintained nature area. There is a path that connects with a system of paths in the conserved area around lakes Stubbergård Sø and Flyndersø, as well as the heathland area at Hjerl Hede where there is a Countryside Museum (Frilandsmuseet) (Figure 45-1). 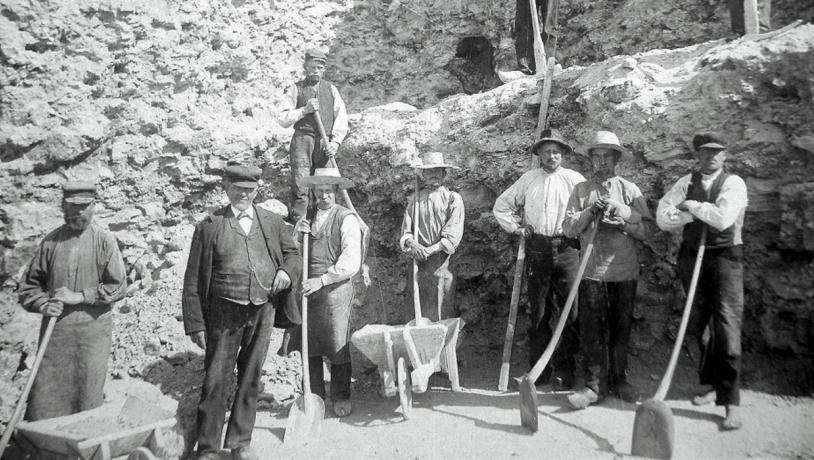 As for the other limestone quarries in the geopark (site 43 Bjørndal; site 42 Odby Klint; site 44 Hjerm Limestone Quarry), the limestone is near the surface here because of the activity of an underlying salt dome that has elevated the pre-Quaternary sediments. Danian limestone is near the surface in the north-eastern part of the salt structure and is only covered by a thin layer of late glacial meltwater sand and gravel. No deep boreholes have been drilled here, but water wells show that the elevated limestone is present in a fairly narrow east-west belt. There are several sinkholes in this area that formed as a result of the local dissolution of the limestone by percolating acidic rainwater. A noteworthy sinkhole, “The big hole” or “The gypsy hole”, is located close to the main road about 1 km west of Bjergby.

The limestone in the quarry is broadly equivalent to that encountered at Bjørndal and Hjerm (sites 43 and 44) and has been dated to the Late Danian, macrofossil zone D (Ødum, 1926). Ødum´s description of the limestone with sporadic bryozoa fits with nanno-fossil zone 7 that was established by E. Thomsen.

The limestone quarry is located just outside the MSL and was first covered by meltwater sand and gravel belonging to the Sønderhede meltwater plain, and then by sand and gravel belonging to the Karup and Hjelm Hede meltwater plain that cut down into the Sønderhede outwash plain. This took place when meltwater from Dollerup/Skelhøje found its way north to Venø Bugt (site 16). The limestone quarry is also located near the glacier portal at the mouth of the Flyndersø – Stubbegård Sø tunnel valley, but these meltwater sediments have been eroded by Karup river and replaced by meltwater deposits from this river (Figure 45-2).

It is of interest that this location was studied by I. Madirazza in 1968. He investigated the areas influenced by the Mønsted and Sevel salt structures in an attempt to establish the relationship between the salt structures and the Quaternary morphology in an area on the margin of the Weichselian glaciation. The Sevel structure is located exactly in this marginal zone. The MSL curves northwards around the elevated east-west belt of limestone where the quarry is located. This led Madirazza to conclude that the elevated limestone topography functioned as a hindrance for the advancing ice. He was also able to demonstrate that tectonic activity has taken place in the sub-surface limestone in late glacial times, interpreted as upward movement of the salt dome.