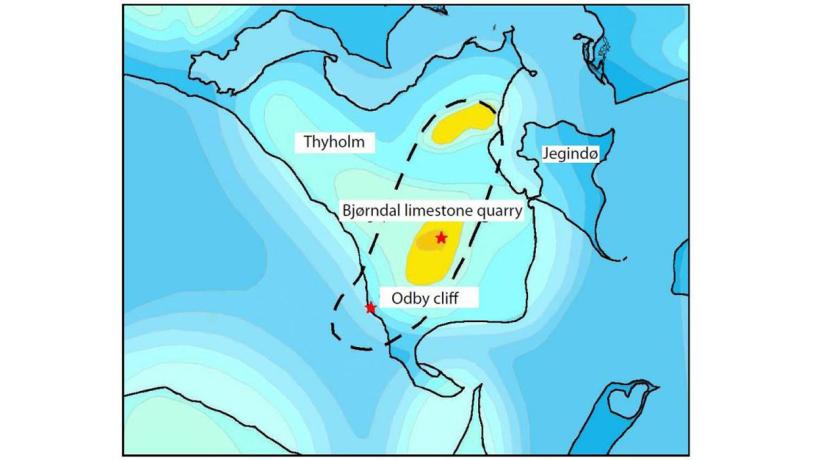 Figure 42-1. Pre-Quaternary surface topographic map showing the shape of the Uglev salt dome. Yellow colours are above sea level. Pre-Quaternary deposits are exposed in several cliff profiles. They are believed to have been thrust upwards by glacial pressure. (Source: Ditlevsen 1990 and GEUS (www.geus.dk, Kort over Danmark)).Photo:Geopark Vestjylland

Odby Klint is a coastal cliff in southern Thyholm where it makes a resistant headland on the simplification coastline of Nissum Bredning. There is a salt structure under the southwest part of Thyholm – the Uglev salt dome – that is one of four salt structures in the GPWJ area. It is evident because it both affects the topography and elevates the pre-Quaternary deposits below the surface. The special feature of Odby Klint is that there are deposits from three glaciations (Elsterian, Saalian and Weichselian) overlying elevated Danian limestone (Figure 42-1 and 42-4).

The cliff profile is about 400 m long and up to 40 m high. The lowest roughly 2 m consist of Danian limestone with layers of flint. The sequence dips about 15° to the southeast because of the upward pressure of the salt dome. The limestone surface is an almost horizontal erosional surface, and at the southern end of the profile it is overlain by a layer of rounded fragments of limestone and flint. This layer has been influenced by ice pressure from the southeast, presumably related to advance of the Elsterian ice from the east (which has been demonstrated at two places on Thyholm and in west Salling), and detailed studies suggest that a glacial lobe was deflected south of the elevated limestone (Figure 42-3).

The limestone is not rich in fossils, although fragments of the bottom-living fauna can be found, as well as trace fossils in the flint. The fossils are described in more detail under site 43 (Bjørndal Limestone Quarry). 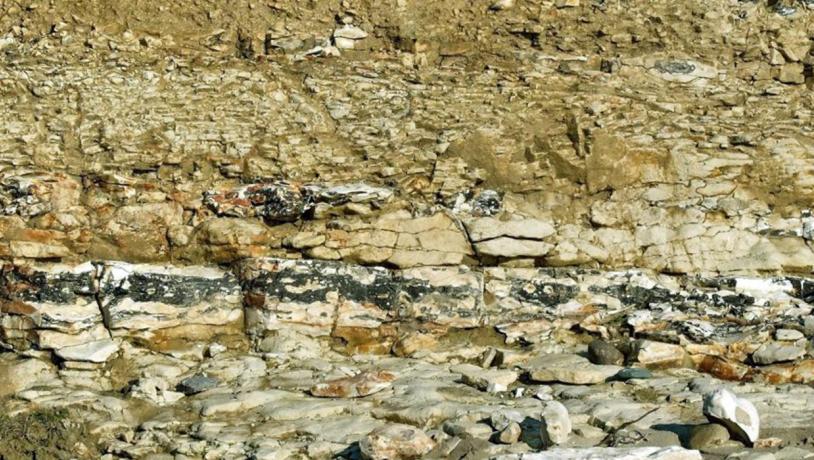 Continuous layers of flint occur along the entire length of the profile, and the flint comprises up to 30% of the outcrops. The large quantity of flint reflects a persistent bottom-living fauna that included a variety of burrowing organisms and a variable rate of accumulation of limestone from the pelagic organisms. The formation of flint takes place after deposition of the limestone by diagenesis. This is a complex and long-lasting chemical process that is not completely understood. Flint consists of cryptocrystalline silica (SiO2) that is believed to come from siliceous sponges and the shells of pelagic siliceous algae (diatoms). The dissolution of silica takes place in a basic environment just below the sea floor. Precipitation of the silica takes place at different depths and in a variety of forms. The final formation of flint takes place at a considerable depth below the sea floor (100 meters or more) and is commonly related to levels enriched in fossils and burrows. These levels may be related to periods with a low rate of sedimentation, possibly because of a cooler climate. The rhythmic layers of flint that occur in both the Cretaceous and the Danian limestone may be related to naturally occurring climatic variations (Milankovitch cycles) so that the flint layers represent cooler intervals at 20.000 and 100.000 year intervals (Figure 42-2). 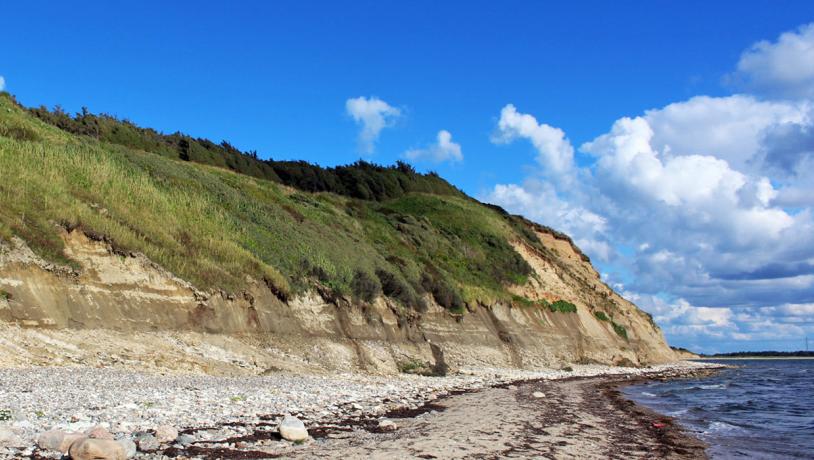 The resistant flint layers form ledges on the abrasion surface in front of the cliff and make a jagged pattern for some distance offshore into the fjord. The Danian limestone is overlain by a 2½ m thick layer of meltwater clay with many sandy intervals. This meltwater clay, together with similar deposits in a large area, belongs to a lacustrine complex from the end of the Elsterian glaciation. Meltwater clay of the same age can be found at several other sites: 1 – The Bovbjerg profile, 6 - Toftum Bjerge and 12 - Nygård Hage. Meltwater clay in nearby areas in the western part of Limfjord is overlain by marine clay from the following Holsteinian interglacial period. The extent of these deposits defines an elongate depression that sweeps around the Uglev, Vejrum and Sevel salt dome structures that formed elevated areas at this time. This lake was a precursor to part of south-western Limfjord (site 6).

The meltwater clay is overlain by 4-5 m of dark grey, calcareous, silty clayey till that was deposited by a glacier that advanced from the southeast. This is believed to have taken place towards the end of the Saalian glaciation (Warthe) when ice advanced from the Baltic area. Evidence of this event can also be found at site 6 (Toftum Bjerge). 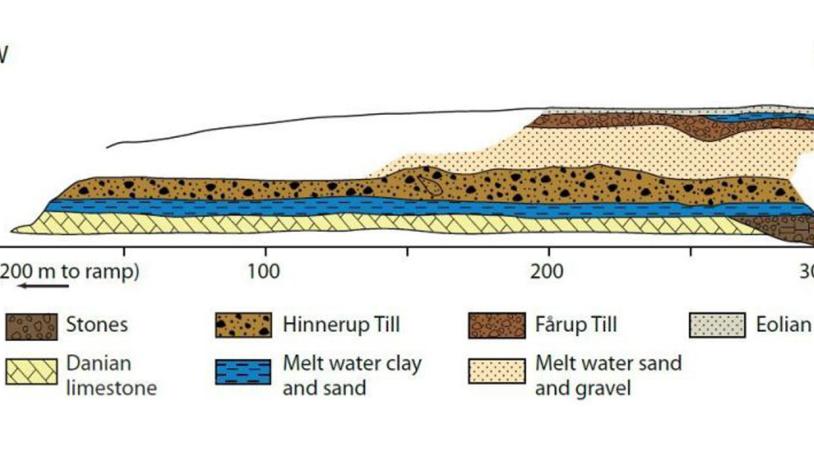 Figure 42-4. Odby Klint. The resistant Danian limestone forms a headland on the simplification coast on the northern side of Nissum Bredning. Stones on the beach are dominantly limestone (chalk) and flint but there are also many from Norway and Sweden. In addition there is material from the Baltic area which bears witness to the fact that glaciers from here passed over the area, probably during the Saalian ice age."Photo:Geopark Vestjylland

The Saalian till deposits are overlain by an 8-12 m thick sequence of meltwater sand and gravel that was deposited in connection with a glacial advance from the northeast. The sand and gravel are believed to have been deposited in front of the Main Weichselian Advance that reached the MSL 23.000 - 21.000 years ago. When this ice melted a reddish-brown, sandy basal till was left behind that can be followed, with varying thickness, at the top of the profile. This till is found in several other profiles along the coasts of Thyholm and Jegindø island, reflecting the wide extent of this significant basal moraine from the end of the last glaciation. This basal till is described in more detail under site 19 (Odby).

During melting of the glaciation, deposits of meltwater clay were washed into depressions in the till surface. These are locally covered by deposits of wind blown sand. The locality is a site of National Geological Interest (NGI 73). It is noteworthy that a glacial lobe in this area was deflected around the high-lying limestone above the salt dome.