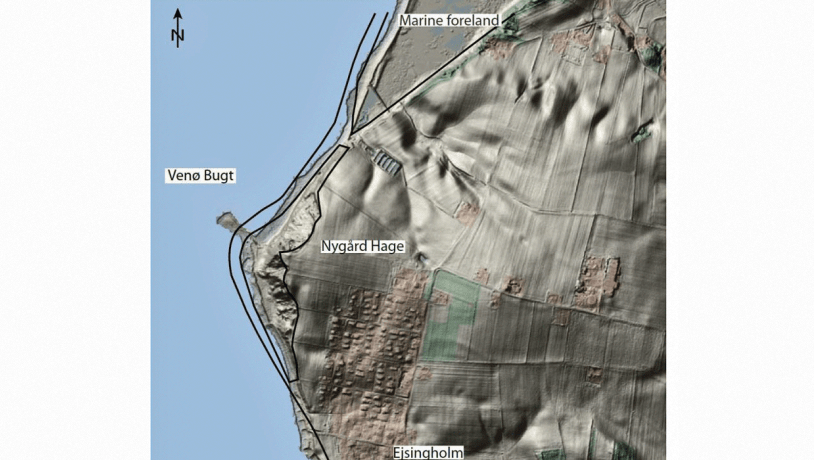 Nygård Hage is located on the eastern side of the bay Venø Bugt, just north of the village Ejsingholm (Figure 12-1). The locality is a cliff that extends for about 1 km along the coast. The cliff contains deposits from two glaciations. The main item of interest is the thick sequence of meltwater deposits from the end of the Elsterian glaciation. 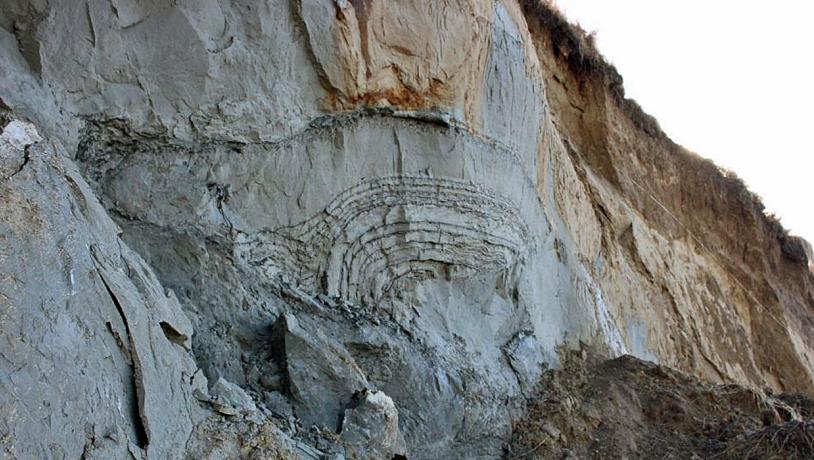 At the base of the cliff there is a thickness of up to 7 m of meltwater sediments that are overlain by up to 10 m of clayey till. The meltwater sediments consist of alternating layers of silt and clay. They were deposited horizontally and have only been weakly deformed so that primary features are preserved. The meltwater sediments are interpreted as having been deposited in a glaciolacustrine environment that was influenced by some wave activity. They are referred to the Elsterian glaciation and are equivalent to similar deposits elsewhere in the geopark (e.g. site 6 Toftum Bjerge and site 42 Odby Klint) as well as in several other coastal cliffs. The clayey till is dark grey and has a composition equivalent to the Saalian till at Toftum Bjerge (site 6). The till unit has been up-thrust and folded, presumably by glaciers that advanced from the north (Figure 12-2 contains a representation of a part of the profile and Figure 12-3 is a photo of folded sediments).

In front of the cliff there used to be tidal meadows on a marine foreland, similar to those at Sønder Lem Vig – Geddal Enge (site 30). Old maps indicate that there used to be a cuspate foreland offshore. However, coastal erosion over the past century has resulted in the coastline retreating by up to 250 m. The profile is well exposed at the present time. Parts of the area, including the remaining tidal meadows, have been nominated as protected nature.

The coastal cliff at Bovbjerg represents a continuous profile that reveals the structure of the landscape and the composition of its components. The northern part of the profile, from Ferring to just north of Bovbjerg lighthouse, is not so well exposed but consists dominantly of clayey till. The central part of the terminal moraine, about 200-300 m north and south of the lighthouse, is strongly deformed. Outwash sediments and moraine deposits have been folded and faulted into glaciotectonic thrust sheets. The thrust sheets strike east-west and dip to the north, corresponding to formation by ice pressure from the north. The thrust sheets were emplaced during advance of the glacier that formed the MSL. After up-thrusting the sheets were overrun by the ice which has deposited a layer of basal till over them. Some distance south of the lighthouse, where the cliff exposures are excellent, the layers are again close to horizontal. 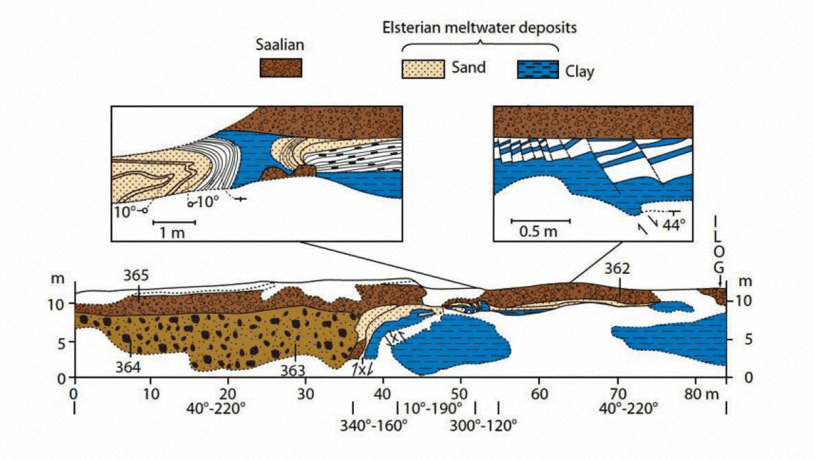 About 1 km south of the lighthouse the MSL is clearly visible in the cliff where the uppermost till layer wedges out and disappears (Fig. 1-3). South of the MSL the cliff consists dominantly of sand and gravel meltwater deposits, but at Fjaltring there is a low cliff with, amongst others, clayey meltwater deposits. Historically this stretch of coast has been subjected to powerful erosion (see site 37 – The West Coast). The coast is now protected by a series of groynes and erosion has subsequently decreased, but it is still adequate to keep the profile open. From one year to the next there can be major changes to the profile because of landslips - especially as a result of storms and high water levels.