The Veserne-Plet-Engbjerg district comprises a flat, low-lying area northwest of Lemvig that is limited by the isthmus of Harboøre Tange to the north and by a steep slope to the south and east (Figure 29-1). The area is a marine foreland and the slope is a “fossil” coastal cliff.

The landscape here was strongly influenced by the marked changes in relative sea level that took place as a result of the isostatic uplift of the land and eustatic sea level changes after the melting of the Weichselian ice. The relative sea level fell when elevation of the land occurred faster than the sea level rise – and vice versa. During the interval from 14.000 – 9.000 years ago (the Continental period), sea level was so low that Denmark was continuous with Britain and Sweden. During the Atlantic period (about 9.000 – 6.000 years ago) the last part of the North America ice sheet melted and the sea level rose rapidly. In the Engbjerg area sea level was about 2 m higher than today and the sea inundated low-lying areas. The so-called Littorina Sea is named after the common sea snail Littorina littorea that was widespread. The marked slope that rises 20-30 m above the low-lying areas was a coastal cliff in the Littorina Sea.

Since then, isostatic elevation of the land has outpaced sea level rise so that the old sea floor is now dry land. The previous coastal cliff is now many kilometers inland. The area is now a marine foreland since it consists of marine sediments. The former coastal cliff and the hilly hinterland consist of glacial deposits.

In addition to elevated marine sediments, the marine foreland also consists of features such as beach ridges, spits and sand dunes. The west coast of Jutland is a very dynamic environment (see site 37 The Weast Coast). The huge volumes of sand that are transported have led to the formation of a barrier coast enclosing lagoons and beach lakes. Bays and inlets along the coast have been enclosed by the formation of sand spits that merged to form isthmuses. This type of landscape has developed at, for example, lake Ferring sø. The stretch of lakes that together form Veserne used to be a lagoon behind a barrier coast.

Elsewhere the relative elevation of the land has dried out the lagoons and raised the adjacent beaches above present sea level. The area is, however, still low-lying and has historically been a boggy and marshy area. Lake Ferring sø and the Veserne row of lakes used to be navigable for small vessels and may have allowed passage from Limfjord to the North Sea in Viking times. Drainage of the area has taken place over the last 200 years and many of the original marshy areas have become cultivated fields. 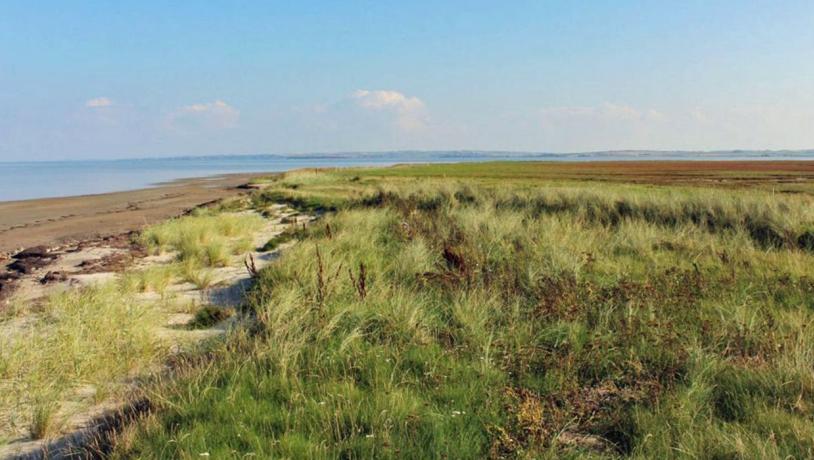 Raised sea floor and Littorina coastal cliffs are found elsewhere in the geopark (e.g. sites 30 and 31) but the Veserne-Plet-Engbjerg area can be emphasized because of its extent and clarity. It is a very fine example of this type of landscape. Veserne-Plet-Engbjerg is part of National Geological Interest (NGI) area 76 and a National Coastal Landscapes area (NK 80). The area is important for migrating and breeding birds and the area east of Harboøre has been nominated as a Natura 2000 bird protection site and as a Ramsar area (Figure 29-3).

There are excellent views over the landscape from many places along the top of the Littorina cliff (e.g. site 47 Hygum Bakke and Engbjerg Church) (Figure 29-2). Viewpoints such as these are suitable locations for the communication of geopark information. In order to be able to appreciate the landscape it is important that the Littorina slope does not become forested.