The Hygum Bakke - Engbjerg well-field area is located just north of Klinkby village about 6 km northwest of Lemvig (Figure 47-1). The area consists of marked hills that reach more than 50 m above the low-lying marine foreland to the north and west (see site 29 Veserne-Plet-Engbjerg). The hills may be part of a terminal moraine. 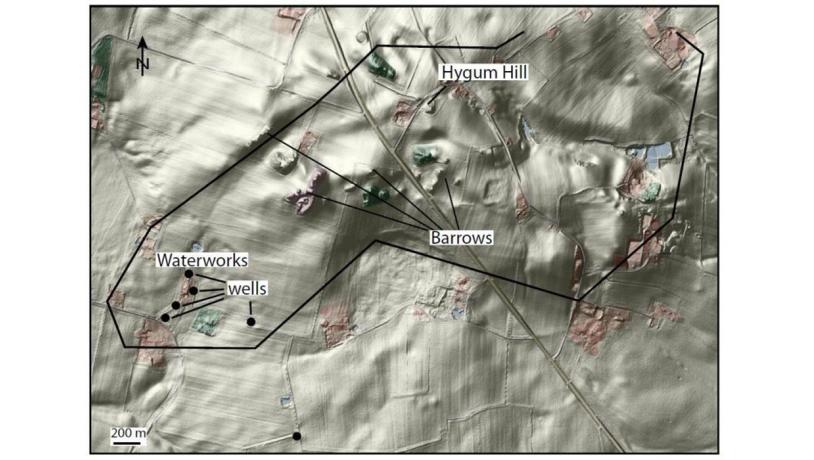 Engbjerg Vandværk, which is the largest waterworks in Lemvig municipality, and its adjacent well-field are located in this area. This waterworks supplies the north-western part of the municipality with drinking water that is derived from groundwater that is pumped primarily from pre-Quaternary layers in the subsurface. The Hygum Bakke (hill), which is one of the highest in the area, is partly artificial, having been built on top of the water tank of the waterworks. Most of the consumers supplied by this waterworks live on the marine foreland to the west and north, and Hygum Bakke is a kind of water tower for this area. 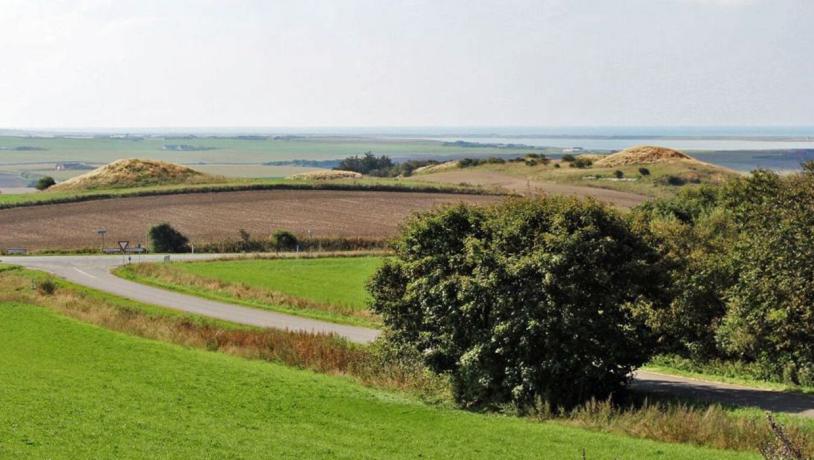 Over the past 20 years there has been an intensive effort to map the groundwater reserves in Denmark. This has been achieved through test wells and the gathering of geophysical data (seismic and electromagnetic methods), together with pumping tests and chemical analyses of the water. These investigations have largely been financed by taxes on water consumption. The purpose has been to locate reserves of groundwater, to establish how well they are protected against pollution, and to determine their quality. The overall aim has been to secure drinking water reserves for the future by identifying areas where some kind of protective action is required. The Engbjerg area has been subjected to these studies so that a wide range of geological, hydrological and water chemical data is available.

In the Miocene epoch (about 24 to 5 million years ago), the distribution of land and sea changed in Denmark because of climatic variations, changes in the sediment supply and subsidence of the North Sea Basin. The coastline moved back and forth across Denmark and the Engbjerg area changed from being near the coast to relatively deep seawater. During deep water periods marine clay was deposited, whereas during shallow water times it was marine sand. A series of sediments alternating from clay-rich (the Vejle Fjord, Klintinghoved and Arnum Formations) to sand-rich (the Billund, Bastrup and Odderup Formations) developed. 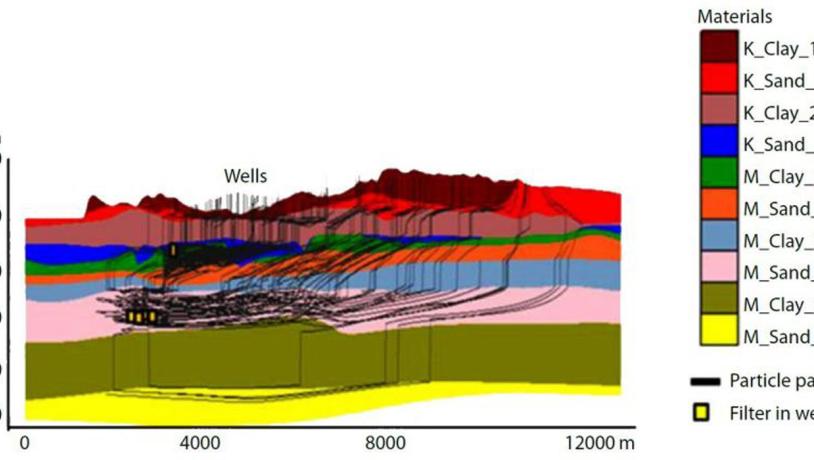 Figure 47-3: Profile through the capture zone of the well-field at Engbjerg (from the groundwater model). The colours illustrate the different layers (sand/clay, M=Miocene, K=Quaternary). Most of the wells are screened at depths of more than 100 m in M-Sand 2, which corresponds to the Bastrup sand. One well is screened in Quaternary deposits at a depth of about 60 m. The black lines are flow lines that indicate the path of the water from the surface to the well. The groundwater model is a large-scale model and does not incorporate the small scale variability in geology that is found within the area (after COWI, 2014).Photo:Geopark Vestjylland

Some of the sandy formations are excellent groundwater aquifers, whereas the clay-rich layers are relatively impermeable and protect the groundwater from pollution. The Bastrup Sand, from which Engbjerg Waterworks extracts groundwater, was deposited close to the coast during an interval with decreasing water depth and a high rate of sediment supply while a delta was developing in the area.

The geological data from the area have been assembled into a geological model that illustrates the spatial extent of the subsurface layers and a groundwater model that simulates the flow of the water (Figure 47-2). There are many large and small waterworks in GPWJ that extract water from subsurface layers. There is a large well-field in Klosterhede plantation (site 20 - Klosterhede and Kronhede) that, in contrast to Engbjerg Waterworks, extracts groundwater exclusively from Quaternary deposits.

As mentioned earlier, the hilly area around Hygum Bakke may be part of a terminal moraine. The geological formation of this area has not been unravelled, but it seems likely that there is a link between the terminal moraine at Nørlem - Nørre Nissum (site 7) and the Engbjerg area.