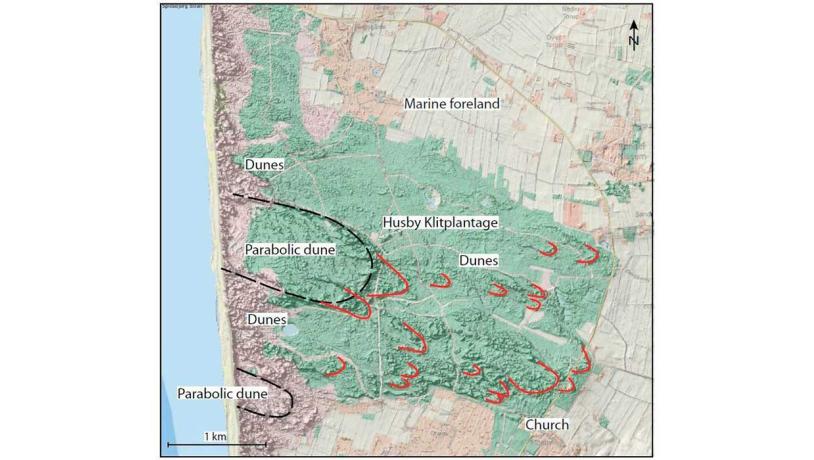 Husby Klitplantage is a plantation area located close to the west coast south of Nissum Fjord (Figure 33-1). The Husby area has been subjected to sand migration in historic and prehistoric times, and the plantation was established to prevent this. Sand movement has led to the formation of a variety of sand dunes, both on the coast and inland throughout the plantation area. 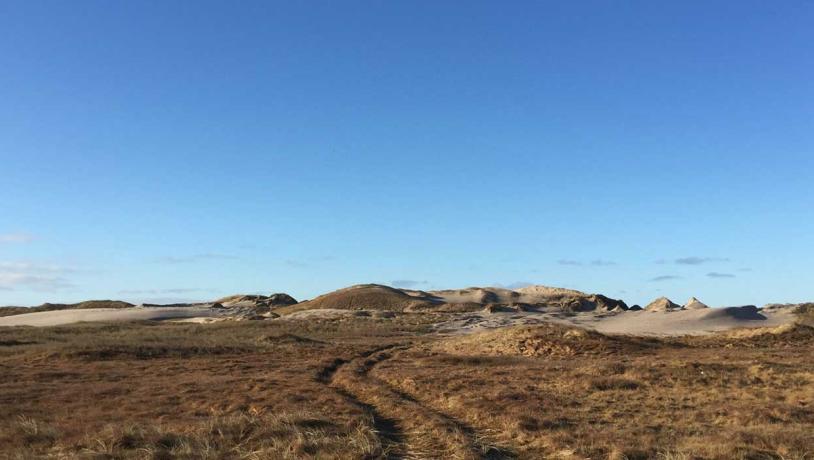 The geological significance of the area is the variety of coastal and inland sand dune landscapes. Some of the dunes lie on glacial deposits of Saalian age whereas others developed on marine foreland. The glacial deposits can be studied in a cliff profile at the western margin of the area (site 27 The Græm Profile) where it is clear that the glacial deposits are covered by a thick sequence of wind blown sand. This part of the coast is subject to extensive erosion (see site 37 The West Coast), and active sand dunes are found in several places (Figure 33-2). The sand dunes extend for up to 4 km inland and are present throughout the plantation area. The age of the sand dunes in the plantation at Husby is unknown, but studies elsewhere in the area have shown that there was extensive sand migration back to prehistoric times. Sand movement has led to the development of several well-developed parabolic dunes that are characterized by a middle section and two “arms” that give the dune a horseshoe or parabolic shape. The dunes begin to form when a hole develops in the vegetation cover so that wind-blown sand movement can take place. The arms of the parabolic dunes point towards the direction from which the wind came – in this case west.

The largest parabolic dune covers much of the western section of the plantation. Its arms are about 1.4 km long and it is about 1 km wide. There is a wind-scoured surface between the two arms that is occupied by a marshy area. This is the largest and most impressive parabolic sand dune in the geopark. 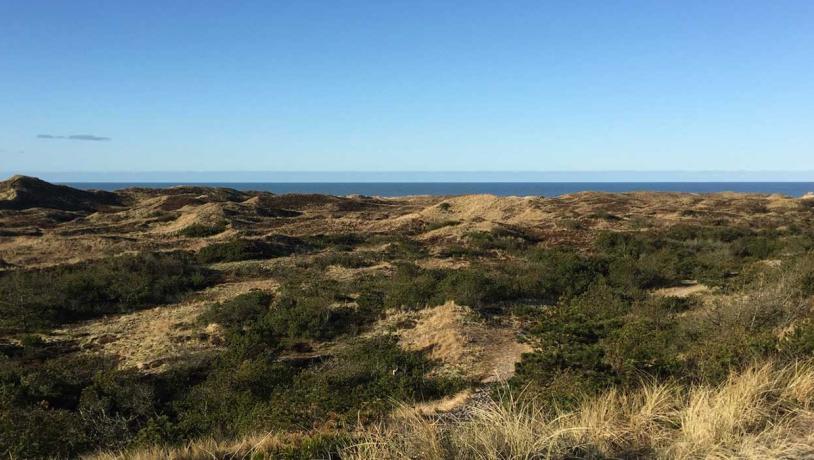 The inland dunes are no longer active since most of the area is wooded. In the western part of the area there are still places where the landscape is clearly visible. The open sand dune, heath and bog areas here have been appointed as comprising a Natura 2000 site (Figure 33-3). This type of landscape, dominated by sand dunes and heathland, is uncommon in Europe. The entire area in owned and maintained by the Danish Nature Agency who manage the area in accordance with a management plan intended to preserve the unique habitat and landscape. This involves, for example, the removal of trees and bushes. Another Danish Nature Agency initiative involves clearing the above-mentioned parabolic sand dune of trees and bushes so that its form remains clear and unspoiled.

Information about Husby Klitplantage is provided by the Danish Nature Agency in the form of a home page, folders and signs, and they have established an extensive system of paths and easy access to parking places.

As mentioned earlier, sand movement in the area probably started in prehistoric times, possibly in connection with cultivation of the light, sandy soil and grazing during the Younger Stone Age. Historical sources report that the migration of sand has been a problem in near-coastal areas for centuries since it ruined farmland and altered the landscape. This problem was exaggerated when forests were cleared in the late Middle Ages, combined with the overuse of dune areas for grazing and harvesting for fodder and thatching material. Climate changes may also have played a role. In 1539 the king forbade by law the destruction of dune vegetation, but the problem continued and got worse. The Husby area was particularly sensitive to sand migration in the absence of fjords or marshy areas in the hinterland, which could stop its movement (as happened at, for example, Nissum Fjord to the north). In the 1850s the sand approached Husby church, and local people persuaded the king to take action. In 1859 this resulted in the establishment of the plantation at Husby, which, together with several other plantations along the west coast of Jutland, were to reduce sand movement.