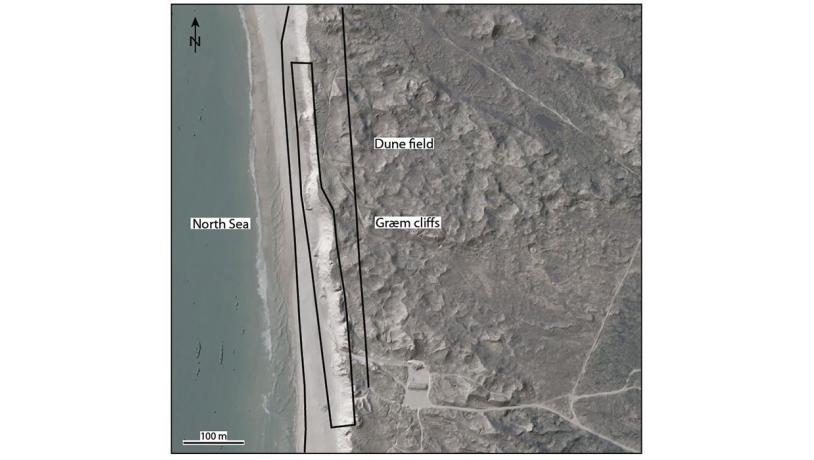 The Græm Profile is a coastal cliff located on the west coast about 4 km south of Nissum Fjord (Figure 27-1). The degree of exposure varies along the roughly 600 m long cliff. The deposits in the cliff consist of glacial, and possibly marine sediments that are overlain by postglacial wind-blown sand. The wind-blown sand has commonly slipped down and covers a large part of the profile, but resistant clayey till stands out and can usually be observed. This stretch of coast is under constant erosion (see site 37 The West Coast) and much of the cliff is regularly exposed after stormy weather and periods with high water level (Figure 27-3 and 27-4). 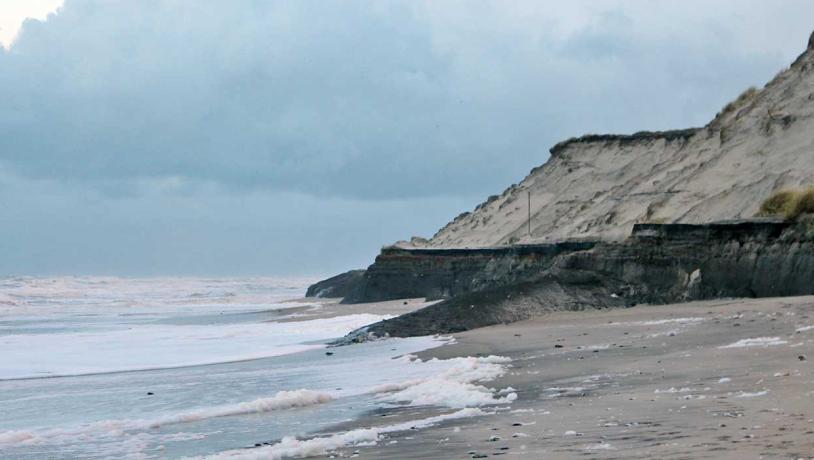 The glacial deposits in the Husby area are part of the large Skovbjerg hill island (see e.g. site 34 Sdr. Vosborg Hede and site 35 Idom Å and Ormstrup Hede). The main geological value of the Græm profile locality is that it is the only cliff exposure along the west coast south of Bovbjerg (and therefore south of the MSL). It is also the only active coastal cliff exposing Skovbjerg hill island (the cliffs at Nissum Fjord are no longer active). The cliff has not been the subject of many scientific studies, and no published material exists.

The lowest exposed layer is a clayey till containing fragments of chalk and flint that varies in colour from dark grey to almost black (see Figure 27-2 for an illustration of the profile). This till may have been formed during the Late Saalian Warthe glacial advance about 140.000 years ago but it could alternatively have been deposited during an earlier Saalian advance. This till is overlain by a thin, continuous layer of stones. These stones were presumably deposited in connection with melting of the ice that formed the moraine. Along stretches of the cliff the stones reach boulder size. The stony layer is overlain by meltwater sand and gravel of variable thickness. This layer is very thick over the intervals with boulders, but is sometimes absent elsewhere.

The meltwater deposits are overlain by a mixed sequence of sandy, silty and clayey deposits whose thickness and composition varies along the profile. The origin of these deposits is not clear, but marine deposits from the Eemian Interglacial (about 130.000 – 117.000 years ago) have been identified elsewhere in the area, and it is possible that they are marine Eemian deposits. This mixed sequence is overlain by a relatively uniform layer of sand whose origin is unknown, but it may well be marine in origin. This sand layer contains a well-developed soil profile with loam and the remains of roots. Local thin layers of peat occur. This sandy layer is overlain by wind-blown sand that comprises the uppermost layer in the cliff. This sequence of layers indicates that an earlier land surface was covered by drifting, wind-blown sand. When this drifting took place is not known, but it was possibly in prehistoric times (see site 33 Husby Klitplantage).

Græm Klit is part of the Natura 2000 site Husby Klit. The Græm Klit area is a popular target for visitors because there is easy access to the beach from the nearby car park.