This locality consists of a roughly 3 km stretch of road near Lomborg, about 5 km east of the coastal profile at 1 Bovbjerg (Figure 2-1). The MSL is the main geological feature in the geopark and marks a boundary between two very different types of landscape. To the north is a hilly moraine landscape (till plain) that was formed in connection with the main glacial advance 23.000-21.000 years ago. To the south the landscape is dominated by outwash plains that formed when the ice melted, and hill islands that are old moraine landscapes from the Middle Weichselian or Saalian glaciation (Figure 2-2). 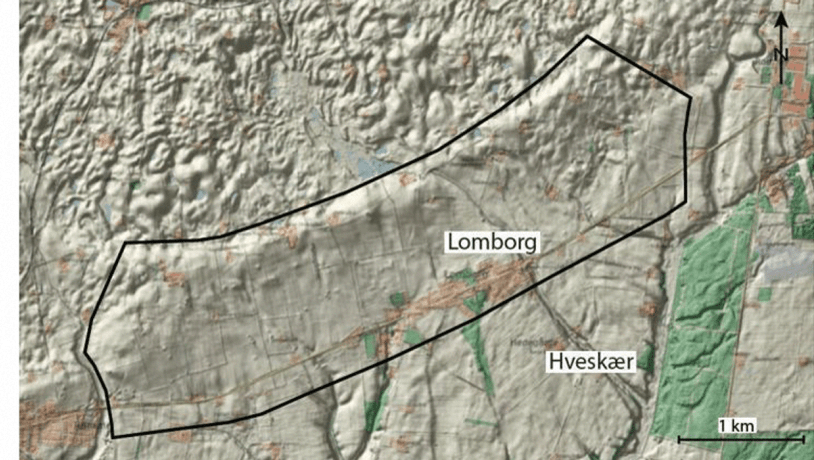 Even though the MSL separates two very different landscapes and is among Denmark´s most significant geological features, its precise location is commonly difficult to locate. There is, in many cases, no obvious topographic feature indicating the presence of the MSL. However, in the Lomborg area it can readily be recognized.

Just north of, and parallel to, the road at Lomborg there is a marked ridge that stretches for 3-4 km. The ridge, which is part of a terminal moraine, reaches 44 m above sea level just north of Lomborg. It is a bit lower to the west and a bit higher to the east. The southern flank of this terminal moraine slopes gradually down to the outwash plain, falling about 12 m over some 500 m, most steeply near the top. The flank consists of moraine clay together with large areas of sand and gravel outwash deposits, as can be seen in alluvial fans on the distal side of the front terminal moraine of modern glaciers. The northern flank of the terminal moraine is steeper than the southern flank and falls about 10 m over a distance of about 100 m. 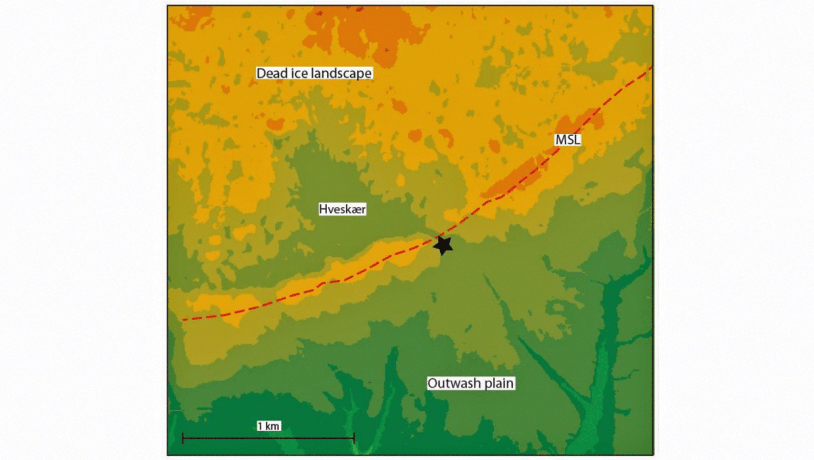 The area north of the MSL is different from the flat landscape to the south and has an undulating surface with many small (up to a few meters) hills and depressions with no drainage. The subsurface consists mainly of till with local areas of meltwater sand and gravel, and peat in the depressions. This is a typical dead-ice landscape that formed when the ice melted behind the low terminal moraine; the depressions are kettle holes. To the north this area abuts site 17 Lomborg-Bonnet-Heldum and these features are described further there.

In the northern part of the area at Hveskær the terminal moraine is cut by a small stream that flows down towards the outwash plain. The valley sides of this stream consist of meltwater gravel and the valley floor, which expands to the south, comprises meltwater sand that, without any topographic break, is continuous with the outwash plain. This stream drains an area behind the terminal moraine including the low-lying boggy Hveskær area. This valley and its cutting of the terminal moraine may have formed at the end of the last glaciation during melting of the ice. There is, however, no evidence for the presence of a glacier portal like that at Rom some 2 km to the east - see site 20 - Klosterhede - Kronhede. The most likely scenario is that the meltwater was derived from the melting of local dead ice.

Despite its gentle topography this locality gives a clear impression of the location of the ice front at the MSL and illustrates the relationship between the terminal moraine and the two distinct types of landscape in front of and behind the MSL.

Hveskær and a series of small lakes and bogs are protected under Nature Conservation Act §3 (biotope protected areas). The cultural historical significance of the area is evident in the presence of many barrows and traces of old roads on top of and in front of the terminal moraine. These prehistoric features are protected. The nature of the subsoil has long been significant for the use of the landscape. The smooth southern flank of the terminal moraine has been suitable for agriculture that has influenced the shapes of the fields.