Drowned glacial landscape modified by marine erosion and deposition. Continuation of the Main Stationary Line in the North Sea.

This locality comprises the sea floor off the west coast of Jutland from Vedersø Klit in the south to Thyborøn in the north (a distance of about 50 km) and extends about 50 km offshore into the North Sea. 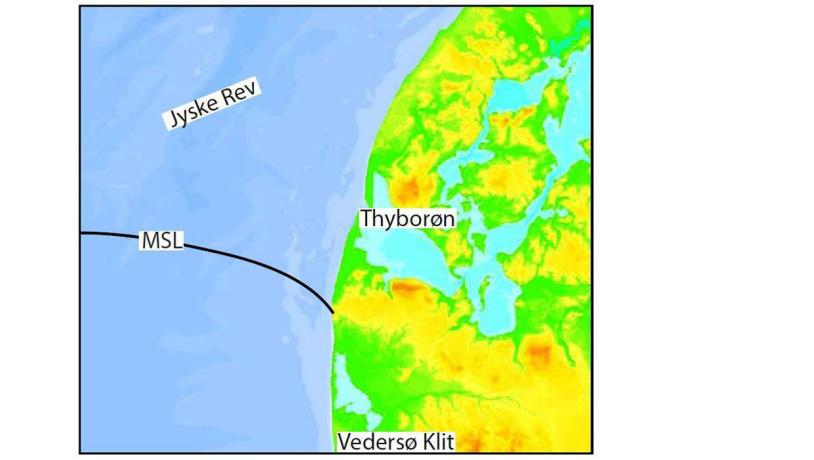 The sea floor in the northern part of the area differs from the normal pattern along the west coast of Jutland where it has a gentle, smooth slope. Here the water depth varies considerably with banks and shoals that together are called Jyske Rev (Jutland Reef) (Figure 48-1). The varied topography of the sea floor at Jyske Rev represents a drowned glacial landscape with, for example, moraine hills and outwash plains. Moraine deposits are locally exposed on the sea floor, and the submarine MSL can be traced across the area. 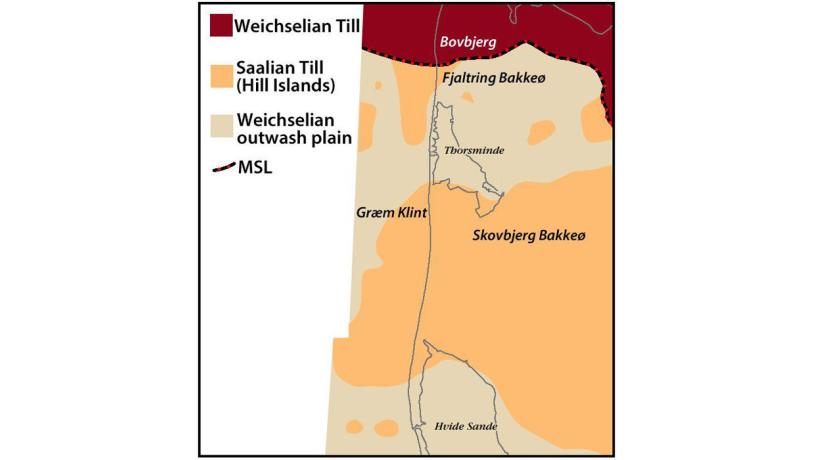 Figure 48-2: The Geopark’s glacial features and main landscape types can be traced on the seabed (after Leth, 2003).Photo:Geopark Vestjylland

The area is rich in raw materials (sand and gravel) and contains important habitats for many marine species. Extensive mapping of raw material reserves and habitat areas has therefore taken place, involving amongst others GEUS (Geological Survey of Denmark and Greenland) to ensure sustainable exploitation of the resources. These studies have involved seismic and side-scan sonar investigations, drilling and sediment samples and have resulted in a detailed model for the geological evolution of the area (and the North Sea in general) since the last glaciation. 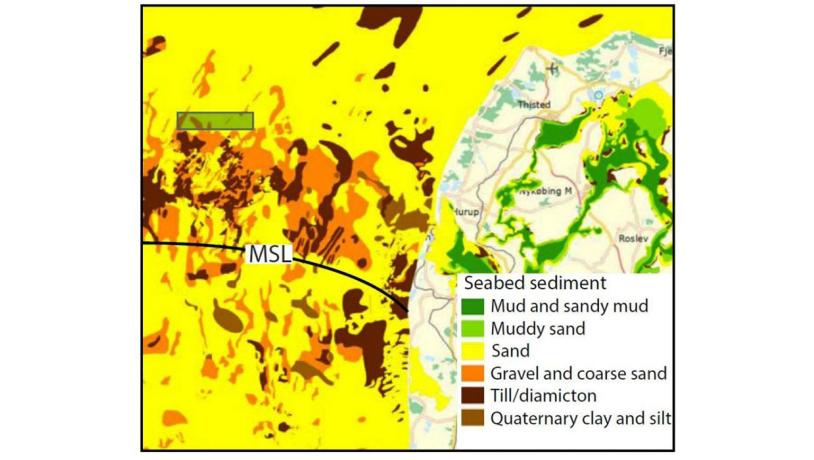 When the Weichselian ice reached its maximum extent 23.000 – 21.000 years ago, the MSL extended roughly east-west across the area just south of Jyske Rev. This glacial advance gave rise to glaciotectonic disturbances and the deposition of moraines in front of and under the ice, as well as during the melting phase. There is, however, no sharp morphological indication of the MSL on the sea floor, partly because the submarine landscape has been modified by marine erosion and deposition. North of Jyske Rev the sea floor landscape indicates the action of several glacial advances. South of Jyske Rev the moraine features represent Saalian hill islands. Meltwater rivers that developed during retreat of the MSL glaciers flowed southwards and merged with those from western Jutland (e.g. Storå). Together they formed large outwash plains (Figure 48-2). During the subsequent rise in sea level and inundation of the area there was extensive erosion and redistribution of the meltwater sediments and there are only few indications of preserved outwash deposits. Seismic studies have indicated a broad network of buried Quaternary valleys in the area (see site 20 Klosterhede - Kronhede).

In keeping with many other localities in the geopark, this area was strongly influenced by the marked changes in sea level that took place as a result of isostatic elevation of the land and eustatic sea level changes that characterized the period after melting of the Weichselian ice. In late glacial times (18.000 – 14.000 years ago) the lowest-lying areas were inundated by the Younger Yoldia Sea and a layer of marine clay was deposited over the glacial sediments. This was followed by an interval in which the relative sea level fell and the area was land once again - the Continental period. About 11.000 years ago, when sea level was at its lowest, it was about 50 m lower than today. The sea level rose again in the early Holocene and the area was gradually inundated from the northwest, a process that accelerated in connection with melting of the remaining parts of the North American ice sheets 9.000 – 6.000 years ago. At his time the area resembled the present Limfjord with an embayed, irregular coastline with protected lagoons, fjords and inlets (see site 36 Skibsted Fjord - Kås Bredning). Fine-grained tidal sediments (Agger clay) were deposited in this environment. The higher moraine hills formed islands of various sizes and beach ridges and spits developed in connection with them. These deposits contain a large proportion of gravel and are therefore important as a source of raw material.

The highest areas were inundated about 6.600 years ago and since then they have remained below sea level. The highest sea level, about 3 m above that at present, was reached about 6.000 years ago. In connection with its inundation, the area was subjected to a new pattern of wave and current activity as the former protected, tidal coastal environment changed to an exposed stretch of coast subjected to wave action and strong coast-parallel currents. This is evident in the sedimentary sequence where there is a change from clay and silt (Agger clay) to sand (the so-called Jyske Rev sand). This sand is today widespread throughout the area and represents the mobile sand that is involved in modern sediment transport. Knowledge of the distribution and dynamics of this sand is important because it influences the sediment balance (and thereby the risk of erosion) on the nearby coasts (see site 37 The West Coast). The source of the sand is assumed to be the extensive outwash plains that, together with the moraine deposits, have been subjected to extensive erosion and re-deposition in connection with inundation of the area.

Figure 48-3 shows the seabed sediments of the area and it is evident that moraine deposits are found in many places. The MSL extends westwards from Bovbjerg and the moraine areas can be separated into two units, those deposited in connection with the Main Advance (and possibly younger glacial advances) and those that represent Middle Weichselian and Saalian hill islands. The large areas of gravel and coarse sand partly represent the above-mentioned beach ridges and spits, but a large part represent erosional remnants of till deposits where the fine-grained material has been washed away. The area of Quaternary clay and silt consists mainly of the above-mentioned Agger clay, for example in a large area off Thyborøn. Sand is the most widespread sediment on the sea floor in this area. This is dominantly mobile sand (Jyske Rev sand) that is constantly moved by waves and currents.

The variable sea floor conditions in the area provide important habitats for marine animals and plants. Areas offshore from Thyborøn and Thorsminde have therefore been selected as Natura 2000 site. Off Thyborøn the Natura 2000 site contains the relatively rare habitat type  “stony reef”. Some exploitation of raw materials is carried out here, partly of gravel for use in construction etc. and partly of sand for coastal protection purposes.