Nissum Fjord is a large lagoon (70 km2 in area) on the west coast of Jutland about 20 km south of Lemvig. Nissum Fjord is separated from the North Sea by an isthmus on which the town of Thorsminde is located. River Storå, as well as several streams, flow into Nissum Fjord. At Thorsminde there is a sluice that controls the water level in the fjord, as well as its salinity (Nissum Fjord is a brackish lagoon). The average depth of Nissum Fjord is only about 1 m, and the deepest parts have depths of up to 2.5 m. It can be subdivided into three basins separated by shallow thresholds: Yderfjord (Outer fjord), Mellemfjord (Middle fjord) and Felsted Kog (Felsted Bay) (Figure 38-1).

The fjord is surrounded by a variety of different types of landscape that reflect the complex geological history of the area. To the east of the fjord is the Kronhede-Klosterhede outwash plain (site 20). River Storå (site 21 The Storå Valley) flows across the southern part of the outwash plain and into Felsted Kog. This river has changed its course several times and has flowed both north and south of its present course. In historical times the River Storå delta has expanded some distance to the west.  Some low hills on the southern shore of the fjord are part of Skovbjerg hill island. As mentioned above, Nissum Fjord’s western boundary is an isthmus that consists of marine foreland and sand dunes (Figure 38-3).

During the Continental period (about 14.000 to 9.000 years ago) this area was dry land, but during the Atlantic period (9.000-6.000 years ago) the sea level rose, and we know that a fresh water lake developed at Felsted Kog. In contrast to the northern coastal areas in the geopark, Nissum Fjord has not been influenced by marked changes in relative sea level since the Atlantic period because the rates of isostatic uplift and eustatic sea level rise have kept in balance with each other.

At some stage the freshwater lake at Felsted Kog became part of a fjord that subsequently became cut-off from the open sea by the construction of spits that merged to form an isthmus and enclose a lagoon (site 37 The West Coast). The age of this process is not known, but in the light of the enormous amounts of material that are transported along the west coast it seems likely that the lagoon formed not long after it became a fjord. The coastal forms in parts of Nissum Fjord indicate some action by waves. The coastal cliffs at Nørre Fjand, Nørhede and Felsted  are part of Skovbjerg hill island. These are now inactive and lie behind a stretch of tidal meadowland. At Nørre Fjand and Fjandø there are well-developed spits and beach ridges. The coasts of the fjord are generally characterized by a low energy environment and there are extensive areas of tidal meadows (see site 36 Skibsted Fjord - Kås Bredning for more details) (Figure 38-2). Marshland has developed in Felsted Kog and elsewhere as a result of the addition of fine-grained material, largely supplied by the river, which are deposited during periods of high water levels in the fjord. Together with the fine-grained deposits from the freshwater lake mentioned above, the tidal meadows and marshlands comprise highly fertile areas.

Nissum Fjord is a valuable biological location because of the extensive areas of grazed tidal meadows, reeds and shallow water that attract large flocks of birds. Nissum Fjord is a Natura 2000 habitat and bird protection site, as well as a Ramsar area and a reserve for migrating birds. Many of the tidal meadows have also been preserved. 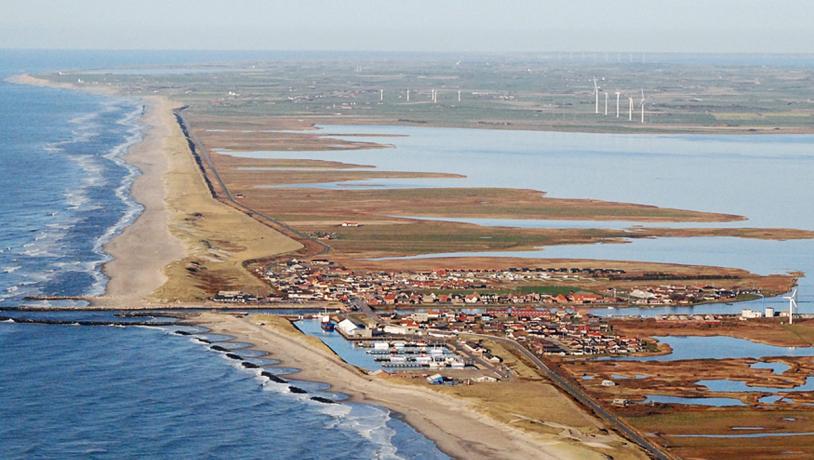 The meadowlands around the fjord and in the stream valleys have historically been excellent grazing areas that contrast with the sandy heathlands elsewhere inland. This grazing has led to extensive breeding and trading of cattle that provide the economic basis for several manor houses (Nørre Vosborg, Pallisbjerg, Udstrup, Rysensteen etc.) in an area that is otherwise depleted in manor houses. These meadowlands were therefore known as “the green gold”. Several attempts to drain Felsted Kog were made in the 1800s, but the project was finally abandoned. The sluice at Thorsminde was built in 1930 and the town has since been an important fishing harbour.

Nissum Fjord is well suited as a tourist destination and there are walking routes, information posts, bird observation towers and shelters all around the coast. Much of this activity is carried out by local volunteers, the Nissum Fjord Network, in cooperation with, for example, the Danish Nature Agency and the manor house Nørre Vosborg. The Nissum Fjord Network has submitted an application to establish Nissum Fjord Nature Park.