This is a small hill island near the village of Møborg situated south of Lemvig and west of Holstebro. Hill islands in West Jutland are glacial landscapes from the Middle Weichselian or the Saalian and are located south of the MSL where they rise above the Late Weichselian outwash plains. During the Late Weichselian the hill islands were heavily affected by wind erosion and soil creep. Soil creep in particular played an important role in forming the landscape so that it appears much more “smooth” and less hilly than the younger glacial landscape north of the MSL. There are several hill islands in GPWJ, ranging from the huge Skovbjerg hill island (e.g. sites 34 – Sønder Vosborg Hede and 35 – Idom Å and Ormstrup Hede) to relatively small ones at, for example, Linde and Fjaltring (sites 26 and 1).

The Møborg hill island is geologically interesting since it is quite small (7 km2; up to 3 km across) and is a very illustrative example of this type of landform (Figure 25-1). There is also a gravel pit with a profile that exposes its internal structure. The landscape is dominated by gentle hills that are highest in the southern third of the hill island. The characteristic form of the hill island is most obvious in this area where there is also a steep erosional slope that rises abruptly from the surrounding area (Figure 25-4). This slope was eroded by meltwater from the time when the Scandinavian Ice Sheet stood at its maximum position at the MSL. 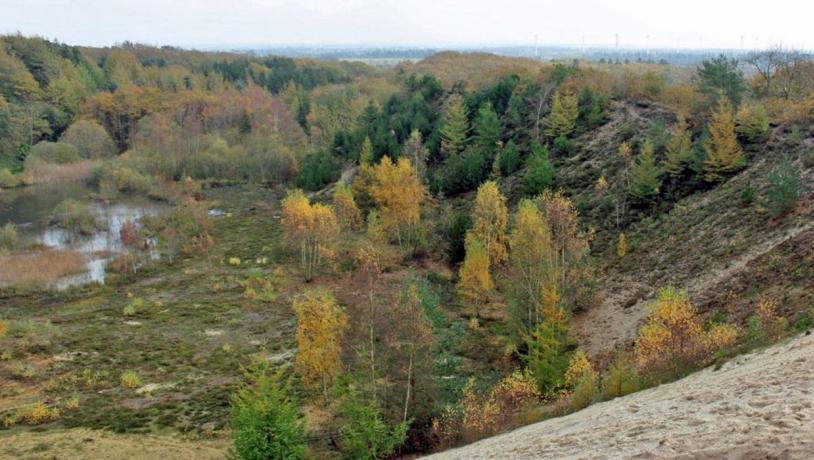 There is an abandoned gravel pit at Hyldal (Figure 25-5) that contains a profile which exposes deposits from the Elsterian, Saalian and maybe the Weichselian glaciations (Figure 25-2). At the base of the profile there is some coarse-grained quartz sand that is interpreted as being reworked Miocene material. This is overlain by alternating layers of tills and meltwater sediments that are referred to the Elsterian glaciation. The uppermost meltwater sand is extensively folded and faulted (Figure 25-3). This is followed by two tills that are separated by, and overlain by, meltwater sand and gravel. This sequence is referred to the Saalian glaciation. This is overlain by reddish-brown clayey till that some researchers consider to be of Weichselian age. 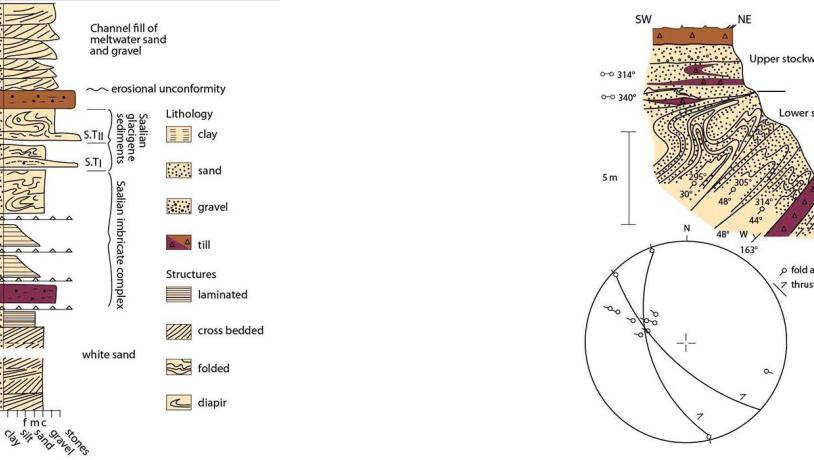 The layer of sand at the very top of the profile is interpreted as being a meltwater deposit from the Late Weichselian. If this is correct it implies that there used to be a thick sequence of meltwater sand around the hill island that has mostly been eroded away.

Parts of the hill island are protected nature areas. The Danish Nature Agency owns the area around the Hyldal gravel pit and has established paths and shelters in the area. An interesting assemblage of plant and animal life has developed in the area since the gravel pit closed in 1992. However, the geological profile is in danger of becoming overgrown and should occasionally be cleaned.

There are excellent views of the surrounding landscape from several places on the hill island. Møborg Bavnehøj (the highest point at 45 m above sea level) used to be used as a beacon. There are many barrows on the hill island, and Møborg church is also located here so that it is visible from some distance.