From the agrarian development in the Viking age to the industrial age; the role of geology. Odby Village provides a good illustration of the special infield-outfield system.

This site has been selected because of the close links between the geology and cultural historical development in large perspectives, regarding both time and space. Until the industrial revolution in the 1800s cultural historical development of the area was closely linked to farming -  the agrarian culture – which in turn was closely linked to natural resources.

The area covered by the geopark can broadly be split into two main types of landscape separated by the MSL; sandy soil to the south and clay-rich moraine soil to the north. The hill islands in the outwash plains are included in the sandy soil area. The moraine landscapes between the MSL and Limfjord are dominated by undulating terminal moraines and dead ice landscapes characterised by small rounded hills and damp depressions. North of Limfjord the landscape consists dominantly of smoother basal moraine landforms. The geological background controlled the local natural resources that were available for agriculture as regards both cultivation systems and the development of settlements.

When agriculture came to Denmark in the younger Stone Age and up through the Bronze Age is was the areas with light soils that were utilized. This is very apparent in the strip of land on either side of the MSL. When ploughs with moul boards, the heavy wheeled ploughs, were available that could turn clay-rich soil, farming extended into areas with moraine soil. Towards the end of the Iron Age, and particularly during the Viking Age, an increase in the population meant that considerable areas of new land were cultivated. Homes and settlements became permanent and with the advent of Christianity and the building of churches the parishes and housing associations became organised. The present parish boundaries have, for the most part, remained unchanged since they were established and still exist in old land registers and church archives.

The pattern of settlement and the field systems used in West Jutland is variable. South of Limfjord there are widespread single-farm settlements and a few hamlets with 3-5 farms where there was little or no communal operation. North of Limfjord and in Salling (Sevel) people lived in large villages in tightly knit communities and the agriculture was run by a joint effort. The reason for this contrast in social structure is no doubt the fertility and the ease of cultivating the soil – which is decided by the geology. Throughout Jutland, apart from the most eastern area, the agrarian structure was based on a field-grass system and not a strictly organised 3-field rotation system like that used in eastern Denmark. The field-grass system involves considerable areas remaining as grassland and the cultivated land (fields) alternating between periods with grain and fallow periods. Grazing cattle played an important role. In the area of the geopark south of Limfjord there was a variety of the field-grass system where there were no well-defined fields and where the individual farmer administered cultivation himself. The grazing of cattle here was very important. 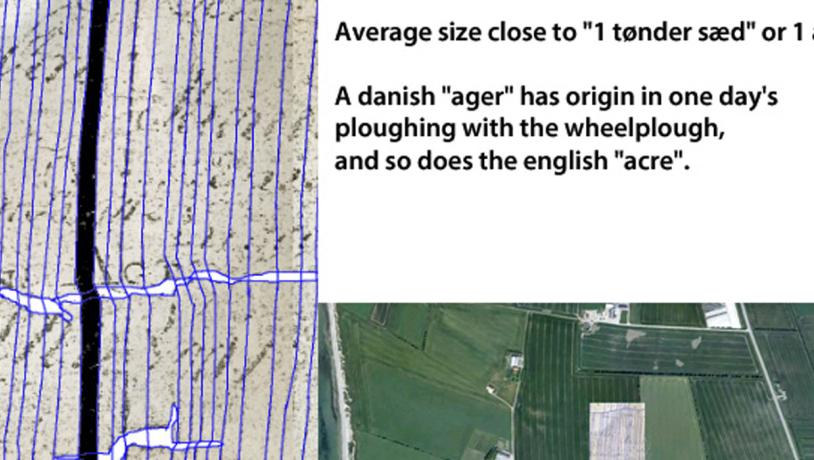 North of Limfjord there was a special system of agriculture involving continuous cropping. The land belonging to the villages fell into three categories: 1) “Alsædejord”: Land near to the village was cropped continuously with no fallow periods; these fields were fertilized once every three years. 2) “Brødjorden” (literally “bread soil”) areas located outside the “alsædejord” area were, after being fertilized, cultivated for 3-5 years after which they lay fallow for a similar period of time. 3) “Oat land”. This comprised the area furthest from the village where communal grassland was located. This was not fertilized and oats were grown for 3-4 years, after which the land lay fallow for 10-20 years. This system always accommodated large areas suitable for grazing and the provision of a hay harvest. This system differs from that used in the eastern part of Denmark and has a different and older origin. It goes back to the Viking and older Middle Ages at which time there was close contact with England. The same system for cultivation was used in Scotland, England and Wales, as well as along the Danish west coast. This system remained in use until the land reforms took place in about 1805.udskiftningen 1805. 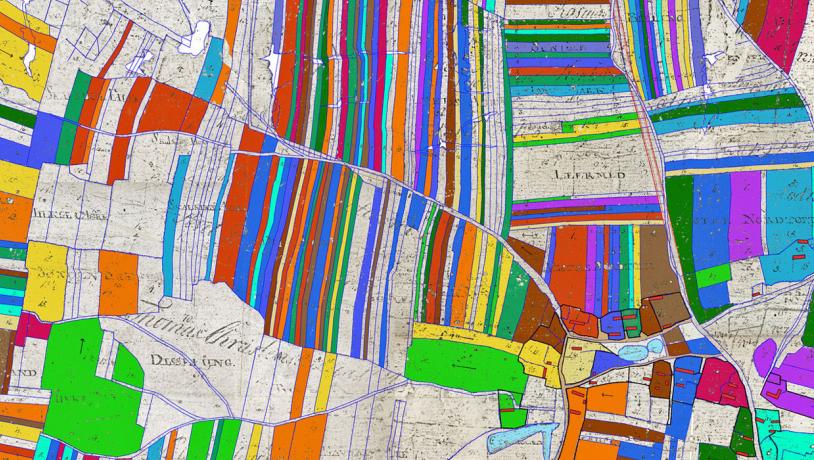 It is interesting to note that if you hear two elderly locals from Odby conversing about their farms, they might refer to ”tønder sæd” instead of ”tønder land” which is the official unit of area. A “tønde of land” is about 14.000 square alen (= 0.627 m) whereas a “tønde of sæd” is 10.000 square alen – which is exactly the same as an English acre. It is not people from Thy that learnt from Englishmen, but the opposite. The Vikings took the Danish word “ager” (which is where “agri – culture” comes from) to England; both a Danish “ager” and an English “acre” were the amount of land that could be ploughed with a wheel-plough in a day. It has been possible to reconstruct the old Odby village and the surrounding field system from a map dating from 1797. The fields belonging to each single-farm were spread thoughout the area around the village that was divided into infields with “alsædejord” and “brødjord”, and outfields where oats were cultivated and there were areas suitable for grazing. Each farm had its own paddock nearby. After the extensive land reforms the individually owned fields were joined together.