This Natura 2000 area contains valuable sand dune landscapes. Together with Husby Klitplantage (plantation) the area has considerable potential for open air activities and communication regarding cultural history and nature. 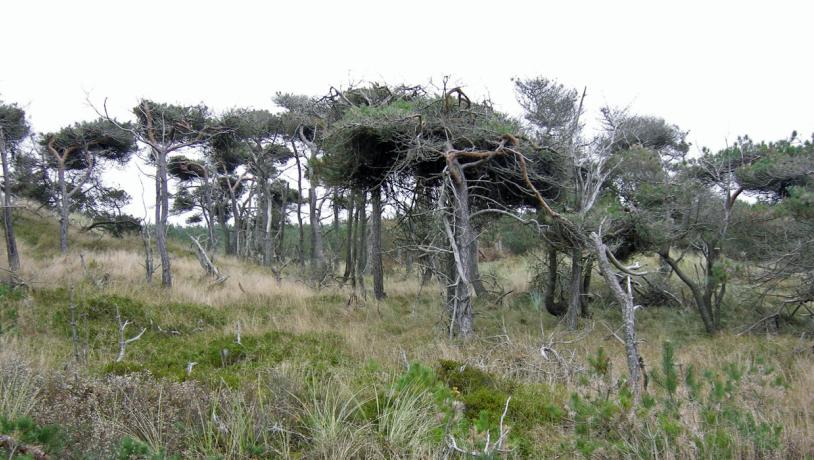 The Natura 2000 area Husby Klit comprises a 14 km long stretch along the west coast between Nissum Fjord in the north and Vest Stadil Fjord in the south. It has an area of 493 ha of which 192 ha are owned by the state. About half of the Natura 2000 area is located in the geopark. Husby Klit is an area rich in sand dunes that developed on raised sea floor and stands out as an elongate belt of coastal sand dunes (Geosites 27 and 33). The sand dunes are locally subject to erosion by the sea and wind that redistributes the sand where it is exposed. The Natura 2000 area varies in width from 1.2 km to 40 m and consists of large areas of grey/green dunes and dune heathland. Different types of dune landscapes are intermingled in much of the area. It is necessary to maintain the area on a regular basis by removing unwanted plants such as Swiss mountain pine, Japanese rose (Rosa rugosa) and heath star moss.

The sand dunes at Husby Klit and the plantation Husby Klitplantage are closely linked as regards cultural history. West Jutland lost its cover of trees at an early date and wind blown sand became an increasing problem. In 1850 the church at Husby was in danger of being inundated by sand and in 1856 four local people were allowed to approach King Frederik 7th to appeal for help. The king was sympathetic and sent the forest ranger J. A. J. Drewsen to Husby to establish a plantation. The local people were ordered to assist in this venture. The plantation at Husby Klitplantage is therefore an early example of interplay between a public authority and local “volunteers”. The first trees to be planted were mountain pine (pinus mugo). This proved to be very successful and the king was very pleased when he visited in 1861. Other types of trees were subsequently planted and the plantation now contains a great variety of trees.

Several bunkers that were built here during World War II formed part of the ”Atlantic Wall” along the entire west coast of Denmark. Husby Klitplantage is owned by the Danish Nature Agency that has established four quite handicap-friendly paths and 16 km of riding tracks. It is possible to take part in geocaching and an orienteering route has been established in the southern part of the plantation. There is a playing place in the northern part of the woods. There are also two campsites with toilet facilities and access to drinking water

The Danish Nature Agency is involved in the leadership of Geopark West Jutland and cooperates in its development. Husby Klit and the plantation are important sites for visitors to the geopark.