A Norman ashlar church that is famed for its apse with two unique four leaved clover shaped windows and six arched arcades supported by 7 columns. Another special feature is the presence of many ashlar blocks of reddish-brown  “iron sandstone” which sometimes are laid in continuous rows. 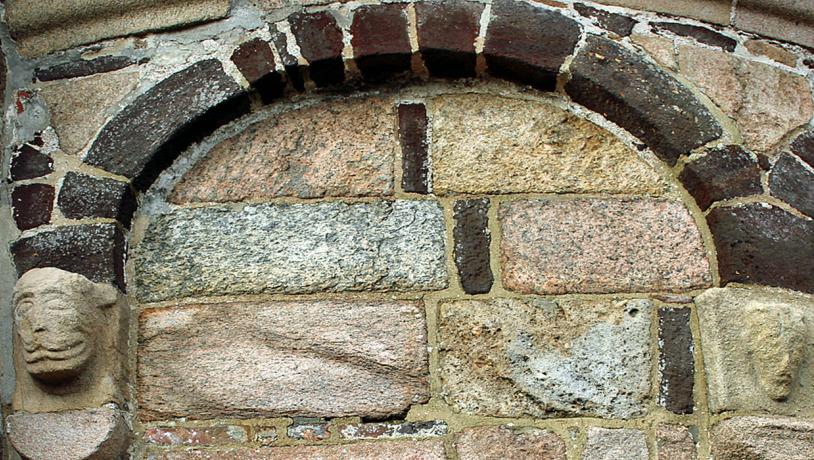 A Wealthy Parish with Many Owners

Staby Church is a parish church located in the southern part of Staby village in the western part of Holstebro municipality. It is a Norman style ashlar church from about 1200. Ornamentations, that include two stone sculptures of faces in the chancel – one male and one female – emphasize that the church was originally paid for by a local magnate. We can only speculate that one of the faces is that of the generous donor. There are stretches of water to the north and west of Staby parish. Nissum Fjord and Felsted Kog lie to the north and lake Husby sø is to the west. These two areas of water used to provide plenty of fish, and widespread meadowland provided grazing for cattle and steers, as well as a harvest of hay. This meant that in olden days Staby parish was regarded as quite wealthy. The parish used to have no less than four manor houses. Staby Church has had many owners. It has been self-supporting since 1918 but its previous owners include the Bishop of Ribe, Mariager Monastery, an influential and wealthy landowner from Pallisbjerg and a wealthy businessman from Ringkøbing. 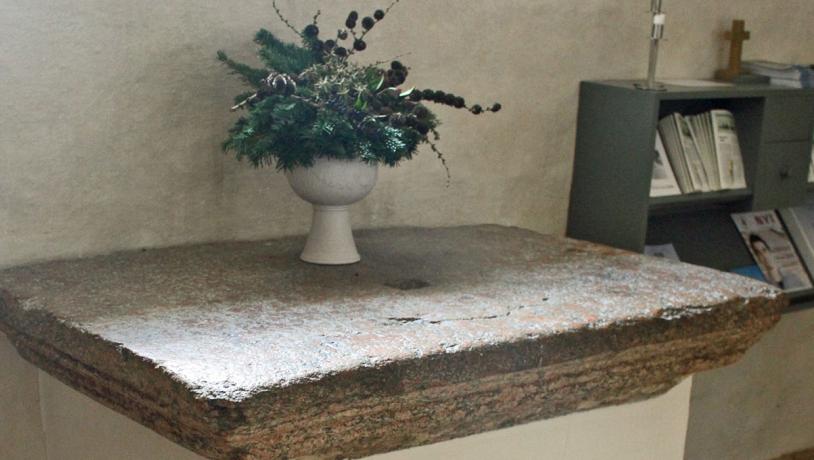 The oldest parts of Staby Church are the apse, chancel and nave. The nave was lengthened later on and in late Gothic times (early 1400s) it was further extended with addition of the broad tower that remains today. The original doors positioned almost opposite to each other in the north and south walls are also preserved but are hidden from outside view by a porch and a chapel that were built later. The tower was originally taller than it is now with four gables and a spire. It probably resembled the tower on the neighbouring church at Husby. This kind of church tower is particularly widespread in western Slesvig (northern Germany). Two of the gables collapsed during a storm in 1719. The spire was not restored and the tower was given its present saddle-shaped roof. With its height of 25 m it is a dominant feature in the flat landscape of this part of Western Jutland.

The decorative and widespread use of reddish-brown blocks in the walls of Staby church is reminiscent of some of the architectural masterpieces of a similar age from Italy. It is, however, a bit of a mystery as to where this iron-rich sandstone came from. Geologists do not know the exact source of these rocks. It is widely accepted by experts, including the leader of Ringkøbing Museum Jens Aarup Jensen, that they do not come from a distant source. While the detailed source of these characteristic stones is not known, their origin is understood. The red-brown colouring takes place when acidic groundwater has passed through a bog and dissolved ferrous iron. When it percolates to the surface it becomes oxidised to ferric iron (it forms natural rust) and is deposited, typically in sand that becomes coloured and cemented. This is the process by which bog iron ore is made. Small quantities of such reddish sandstones can be seen at the coast at, for example Græm and Søndbjerg. It is possible that these red-brown sandstones came from the coast, which lay about 1 km further west when the church at Staby was built. 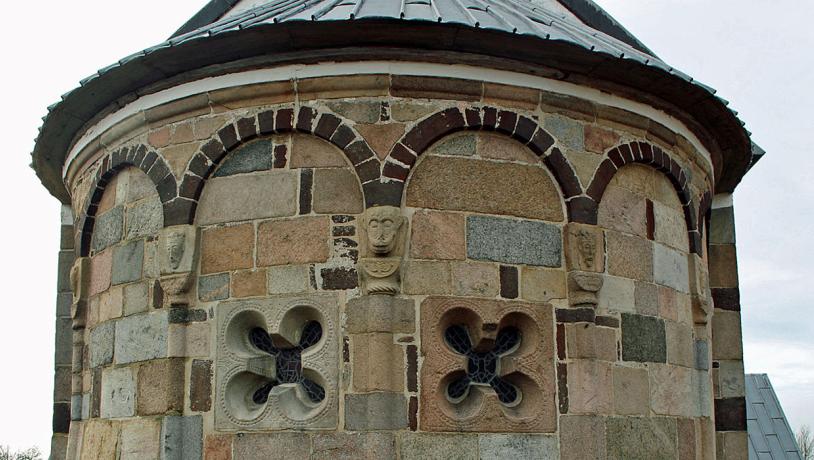 The Apse – a Place of Wisdom

The 7 columns and the stylish four leaved clover shaped windows are no doubt very symbolic, whose background lies in the theological thinking that developed in the 1100s. We should perhaps interpret the role of the 7 columns in the light of an excerpt from the Old Testament “Wisdom has built her house; she has set up its seven pillars” (Proverbs 9, 1). This is interpreted to mean that Christ should not only be considered to the represent the issue and power of God, but also represent His great wisdom. There is considerable symbolism associated with the number 7. It is the sum of 3 (the Trinity) + 4 which is the symbolic number for the world and mankind. The number 4 is also the number of the ancient elements (earth, wind, fire and water), the four corners of the world, the four evangelists (Matthew, Mark, Luke and John) etc.

The northern wall of the chancel reveals a strange feature. Two of the rows of this iron-rich sandstone, a little more than 1 m above ground level, contain some long, deep scratches. These are not natural erosive features; they must be man made. According to tradition, the local farmers used to scratch their coulters (ploughshare cutting blades) along the wall here so that they would be blessed before the ploughing season started in the spring. This scratching would not sharpen the coulters so the act only had a ritual significance. In his book “Dansk sten fra sagn og tro” (Danish rocks from myth and belief) from 1994, Mads Lidegaard mentions that such scratch marks can be found in the walls of several churches in Denmark. 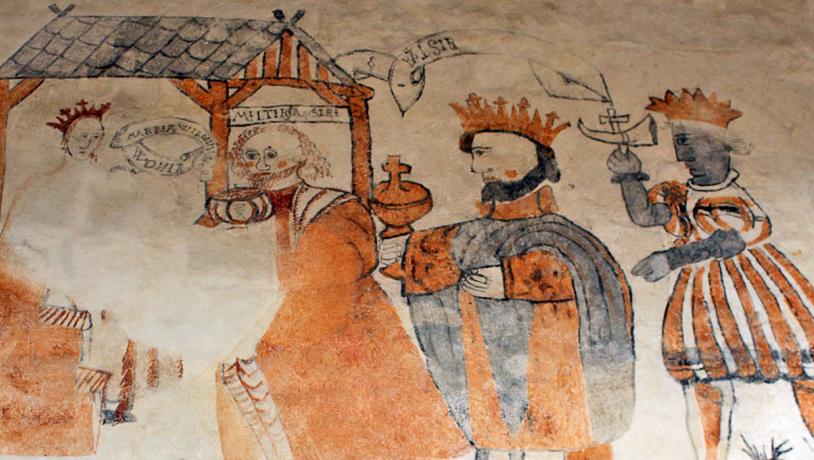 Interesting Items Inside the Church

In addition to the two carved faces there is a noteworthy large ashlar block with a figure of a man wearing a crown who appears to be praying. Is this the figure of Christ or is it the King? There are several murals that came to light during restoration work in 1989. The large murals on the northern wall that date from 1545 are particularly impressive. A wrought iron door from 1725 leads to the burial vault. The door has a mirror-image monogram for Frans de Linde, a wealthy landowner from Pallisbjerg. Inside the vault there are 4 coffins that contain the remains of members of his family.

Staby Church is a very significant non-geological site. It does, however present geological challenges as to the source of the unusual iron-rich sandstone building material.