Norman ashlar church. One of few magnate churches built with a tower. The foundation has Runic in-scriptions telling about who financed and who built the church. The church also tells stories of a late Middle Age fire, legends and ballads and even an earthquake.

One of Very Few Churches Built by a Magnate

Søndbjerg Church is situated in Søndbjerg in the southern part of Thyholm. It is a Norman ashlar church from the early Middle Ages and is one of very few churches built by a magnate (a wealthy and influential landowner) with a tower. It was dedicated to Mary which indicates that it was a church of high status. During a thorough restoring process in 1909 a foundation corner stone was found with runic letters. The translated text reads: “Jacob commissioned, Skjalm made. Where the altar is, there are the eyes”. This is interpreted as meaning that Jacob was the magnate who financed the church and Skjalm was the builder. It is very rare to find written evidence about how a Norman church came in to being. During the restoration work the stone with the runic letters was placed in the wall of the tower. 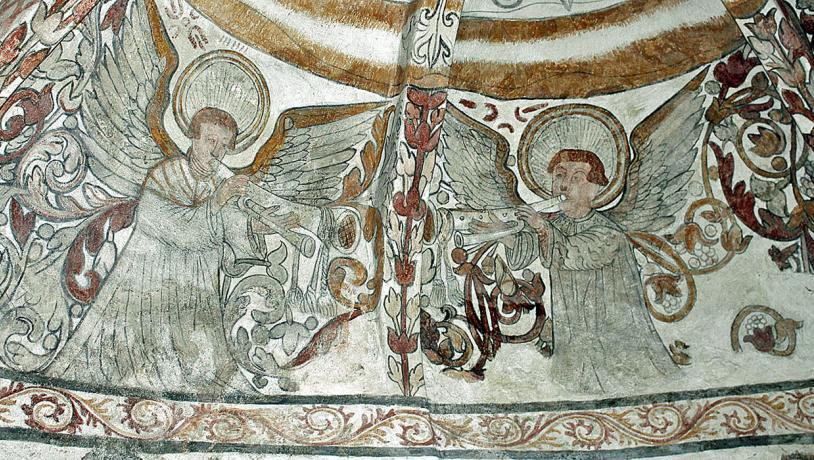 A Lovestory, a Fatal Fire and Banning by the Pope.

There is a surviving ballad from the Middle Ages and a legend of a dramatic love story in Søndbjerg. This ended with the owner of Helleris (a farm that still exists) being burnt to death inside the church. We know that the church had been interdicted by the pope in the late Middle Ages, so it is possible that this crime could have taken place. The late Gothic tower was restored by the National Museum in 1967. They found clear evidence that there must have been a serious fire in the church at some time. Excavations revealed that the church was originally a couple of meters longer and that it had a tower that was built at the same time as the original church. They also found fragments of the basin of the baptismal font that explained the defects of the present font. It was concluded that the original Norman tower collapsed during a fire in the late Middle Ages, after which the present tower was built in late Gothic times. 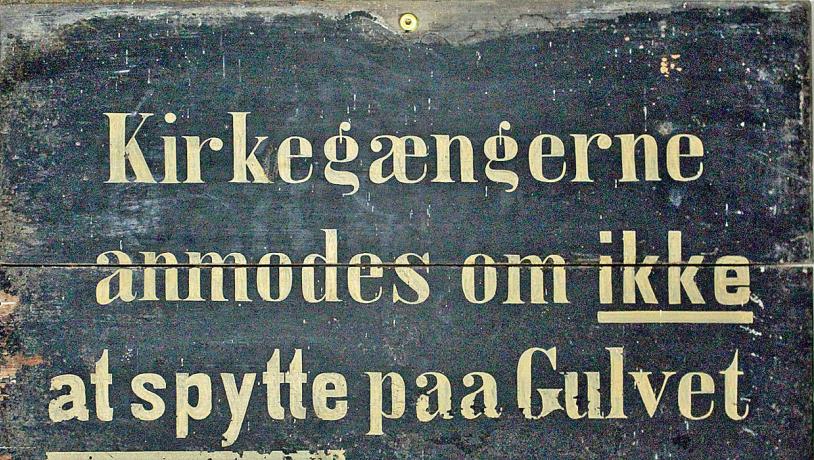 According to J. N. Wilse who was the son of a priest at Søndbjerg in the middle of the 1700s, the church was affected by an earthquake in 1745 that caused cracks in the brick wall of the chancel. He also relates that the earthquake caused a cliff at Serup beach to collapse. According to the Danish Geological Society in 1915: “In February 1745 there was a powerful earthquake on Thyholm. This caused cracks to appear in the wall of the chancel of the church at Søndbjerg and landslides in some hills on the beach. These events appear to have been coincidental with the earthquake that took place at Christianssand (now Kristiansand) and the surrounding area in south Norway. This extended under the sea and seems to have originated several miles from Copenhagen”. 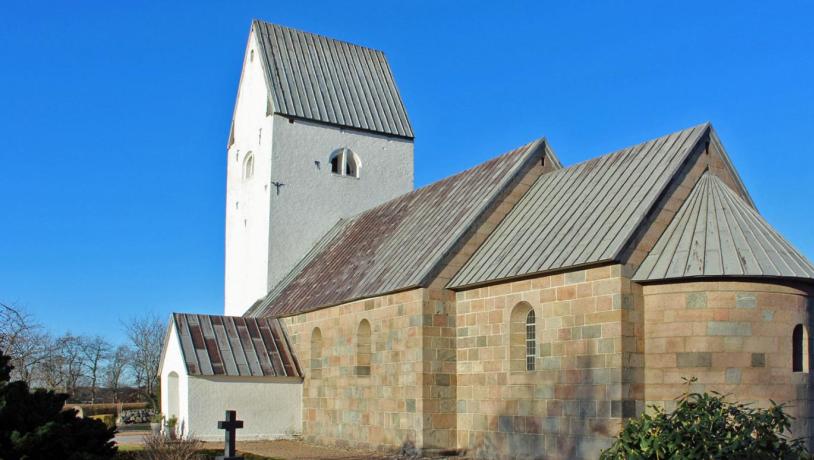 The wall of the churchyard is built of large stones that were left over from the construction of the church itself. There were plenty of boulders in the surrounding landscape. There are many rejected stones with traces of the splitting technique that was used. In the cemetery there is a finished ashlar stone that reveals that the stones used were rounded and transported to the area by glaciers. Only one side of the ashlar stones was planed off, and the sides were adjusted by hammer and chisel; the back side of the ashlar stones remained rounded. The fact that the back side of the ashlar stones is rounded has resulted in many of the church walls bulging outwards. Most of these walls have consequently been taken down and rebuilt, commonly more than once. The walls of the Norman ashlar churches were built as roughly 1 m-thick “box walls” where the inner side consists of small, raw fieldstones and the outer side of treated ashlar stones. The gap between these two walls was filled with stone fragments mixed with mortar.

A Pioneer of the Enlightenment

Jacob Nicolai Wilse (1735 – 1801) was the son of a priest from Søndbjerg. In his youth he studied nature and people on Thyholm. His valuable observations from the middle of the 1700s are recorded in a small book from 1762. He was one of the pioneers of new science in the Age of Enlightenment and he became a priest at Spydeberg in southeast Norway. As a spin off from his scientific work in Norway he established a garden in rococo style that really was a nursery with suitable utility plants for Norwegian farmers. This garden was reconstructed at Spydeberg in 2014, and a copy on a smaller scale has been made at the Thyholm Local Museum at Søndbjerg. This museum has been established and is run by local volunteers. The museum has established a series of paths around Søndbjerg following themes based on Wilse´s observations and descriptions.