Norman ashlar church on the west coast. The church has been excavated revealing remains of the previous wooden church and finds of German coins from the late Middle Ages bearing witness to trading connections with the Hanseatic League. 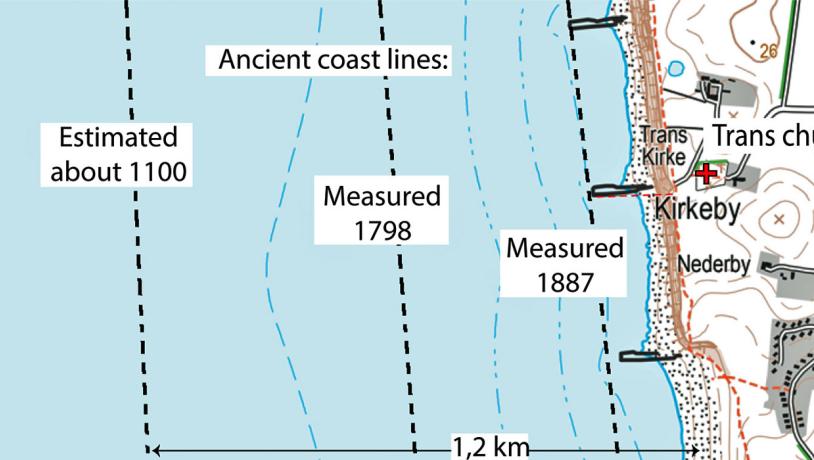 A Church on the Edge

Trans church is a Norman ashlar church that is located 50 m from the cliff top on the west coast about 1.5 km south of Bovbjerg lighthouse. Before the lighthouse was built the churches at Trans, Ferring and Fjaltring were important landmarks for ships in the North Sea. When the church was built it was located in the middle of the parish at a safe distance from the coast, but coastal erosion has resulted in its present precarious position only 50 m from the dynamic coast. The stretch of coast from Ferring to Trans was protected with the construction of groynes in the early 1900s, but this has not completely stopped the coastal erosion. The cliff at Bovbjerg is retreating at a rate of about 50 cm per year, despite additional efforts to prevent erosion by the feeding of sand onto the beach.

The tower at Trans was added in the late Gothic period, and there is no porch. The original north and south doors have been bricked up, and the entrance is now from the south through the base of the tower. There used to be an extra door at the western end of the northern wall, probably for use by the upper classes. Trans Church is an impressive building that dominates the landscape not far from the top of the cliff. The absence of trees gives a special impression of the nature of the landscape and the role of the buildings. The dominant westerly wind prevents trees from becoming established and explains the rather special features in the cemetery in the churchyard. Here the gravestones are surrounded by a kind of scaffolding to provide shelter for the sparse vegetation. The same feature can be seen at Ferring Church some 3 km to the north.

The church was thoroughly restored in 1963-64 when the National Museum carried out excavations into the floor of the church and elsewhere. The excavation revealed details about the history of construction of the church, most interestingly disclosing remains of its precursor – a wooden church. The new stone church was built with a slight overlap of the northern wall of the wooden church. This meant that excavation of the floor revealed part of the cemetery of the wooden church with graves from the early Middle Ages. Amongst the finds were coins form the interval between the early and late Middle Ages. Some of the late Middle Age coins came from northern Germany and bear witness to trading connections with the Hanseatic League. 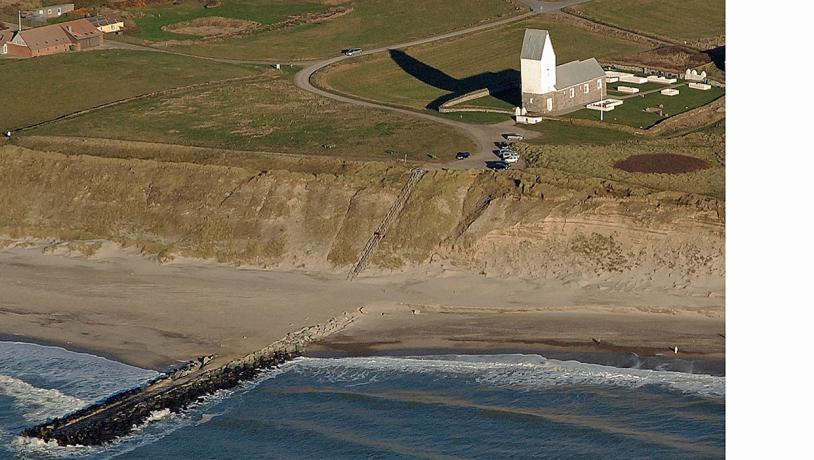 Christianity was officially introduced to Denmark by king Harald Blåtand (Bluetooth) in 965. The arrival of Christianity was accompanied by the introduction of churches. Several hundreds of small, simple, wooden churches were built through the 1000s in the Norman style with a nave and chancel. Towards the end of the century, new churches were built of stone and many of the wooden ones were replaced by stone churches. The wooden churches and their accompanying cemeteries had been consecrated and the new stone buildings were erected on holy ground on the remains of the wooden churches. Trans church is a splendid example of this practice. 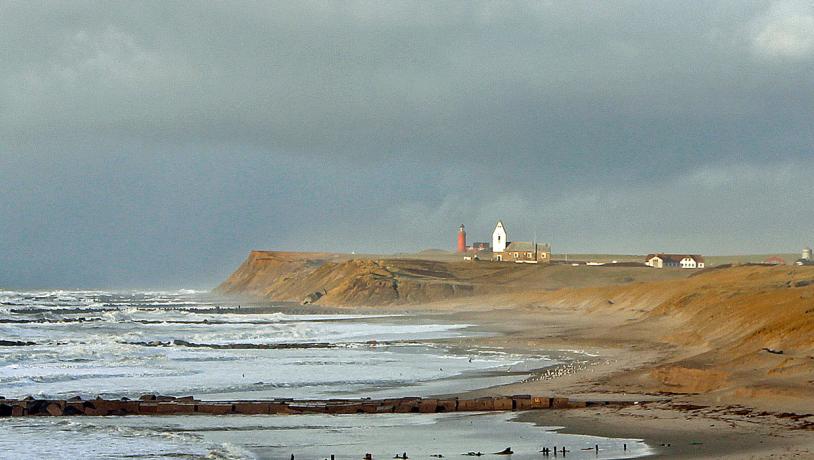 The building located east of the church used to be a school, and apart from a small group of farms the church has an isolated position. This is a characteristic feature for all the Middle Age churches in West Jutland. The modern towns are from the end of the 1800s and later and became established as a result of the development of agriculture and industrialisation. From the Viking Age/early Middle Ages and until the agrarian reforms around 1800 there were no villages here, unlike the situation in eastern Denmark, north of Limfjord and in Salling. The pattern of building in Western Jutland consisted of single farm settlements. Single farms are widespread throughout the area where the character of the soil and the morphology were such that it was not possible to have sufficient area of fertile soil to support larger communities with cooperative agriculture. Such relatively infertile areas are widespread in the hilly terminal moraines, dead ice landscapes and sandy outwash plains.