The watermill at Åmølle is about 500 years old and is conserved as one of the most interesting water mills in Denmark.

The mill has the only surviving intact example of a Roman drive in Northern Europe.  It is located on raised sea floor close to the terminal moraine at Toftum Bjerge. It has been reno-vated and is being run by volunteers.

The first written mention of Åmølle is from 1490 when it belonged to Gudum nunnery and its water supply was from the Klostermølle å / Fald å river system. The watermill has not always been located here – the original mill was situated about 440 m farther west. There is a stone with an iron nail at the original site where horses used to be tethered. The mill was moved in 1839 after a violent storm on 2nd- 3rd January forced so much water over the isthmus at Thyborøn that the mill could not withstand the pressure. The grinding house was, however, saved. 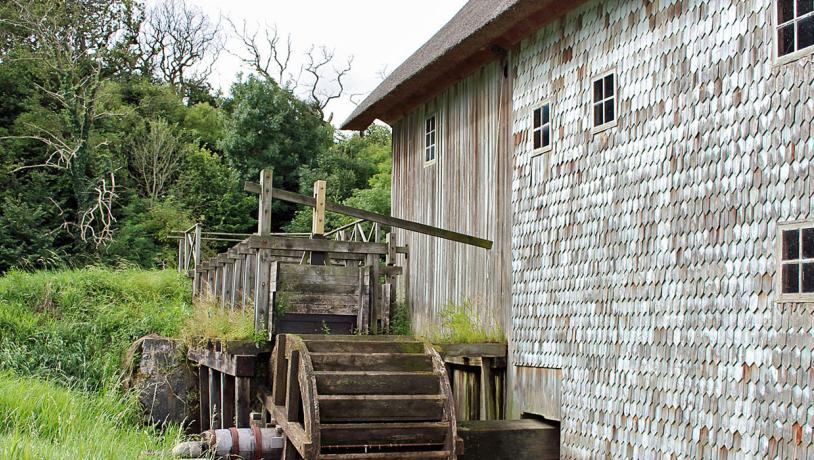 The mill was rebuilt at its present location, re-using a lot of material. Until 1939 the wheel was driven by an undershot water supply. This was later changed to breastshot and has now become an overshot watermill. Åmølle watermill is one of the most interesting in Denmark since one of the two cogwheels has the old Roman drive (a so-called Beighton Drive) that is the only surviving intact example in Northern Europe. The cogwheels drive two grinders and other machinery, none of which are believed to be original. During a visit to Åmølle you meet different types of cogwheels and material from a variety of time periods.

The Water Supply Was Cut Off

The water supply from river Fald å was cut off in 1953 in connection with regulation of the watercourse to drain the wet meadowlands for cultivation and the mill stopped working. Åmølle was privately owned until 1961. The ownership of the mill is known right back to 1718. 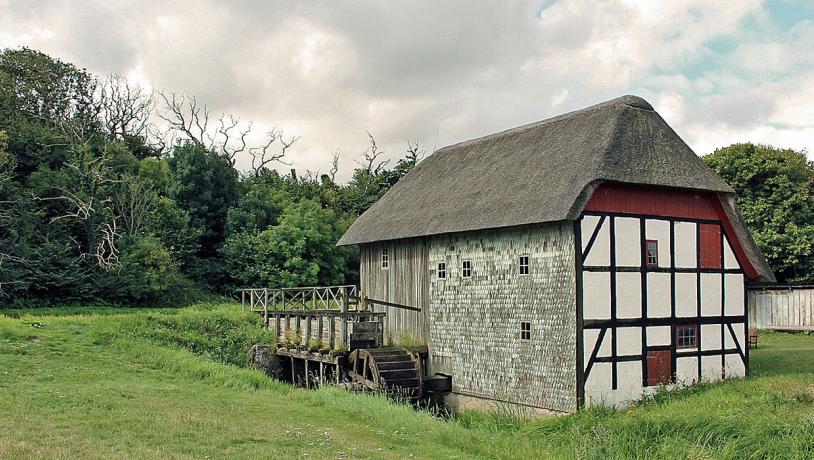 Volunteers Take Over the Mill

In 1961 the owner of the mill, a third generation miller called Hans Hedegaard, sold it to the National Museum to save it for posterity, but he continues to live in a neighbouring house. The mill was taken over in 1972 by “The Friends of Danish Mills” and, in order to safeguard local interest, the “Åmølle Society” was established in 1999. In 2013 this became an independent society with the purpose: “as owners of the conserved Åmølle to preserve and run the mill for future generations as a historic memorial and a cultural attraction, and to allow public access to this historic watermill”. The society took over ownership of Åmølle in January 2015 and has so far lived up to its aims and ambitions with help from local volunteers. The purpose of this conservation was to preserve the mill and the old coastal cliff, including the area between the mill and Limfjord. The conservation, which includes the maintenance of the old oak and thorn scrubland, is intended to preserve the area as a framework for the watermill.

Relations to the Aspiring Geopark

The conserved watermill and the well developed system of paths with information posters to, for example, Toftum Bjerge, and the large group of volunteers ensure that local people and visitors can obtain a splendid cultural historical, geological and biological geopark experience.