Heath with inland sand dunes and parabolic dunes on a hill island.

Sønder Vosborg Hede is one of three heathland areas in the geopark in the northern part of Skovbjerg hill island. Together with the heaths at Nørre Vosborg and Sandfær it is part of a large plantation called Stråsø Plantage that is owned and administered by the Danish Nature Agency (Figure 34-1). 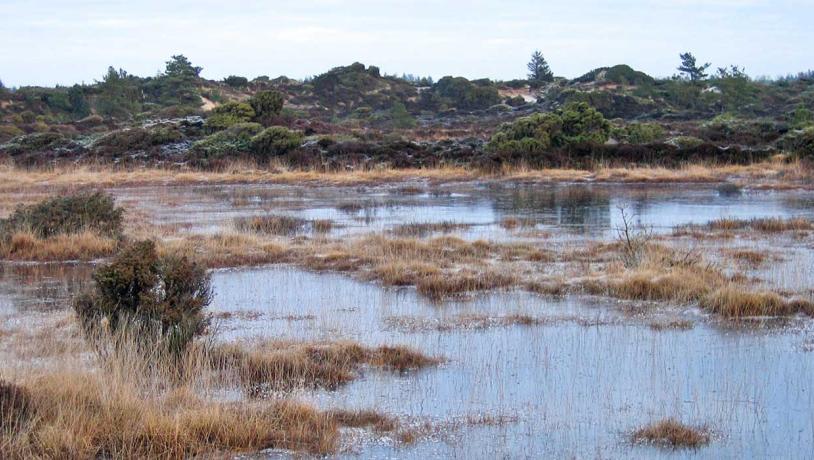 Sønder Vosborg Hede is an undulating heathland area with many inland sand dunes, including several parabolic dunes (Figure 34-2). The dunes formed in late- and postglacial times, but historical sources reveal that sand migration has also been active in more recent times. Some open sand surfaces remain, and some of the dunes are still active.

Until 1998 the heath was closed to the public since this was one of the last remaining breeding grounds for black grouse. The area is now accessible with parking places and signposts. The area is maintained by the Danish Nature Agency as a varied heath landscape. Sønder Vosborg Hede has been chosen as a representative geological site because of the parabolic dunes and ready accessibility, but combined with the two other heathland areas and Stråsø plantation the area comprises a single entity. 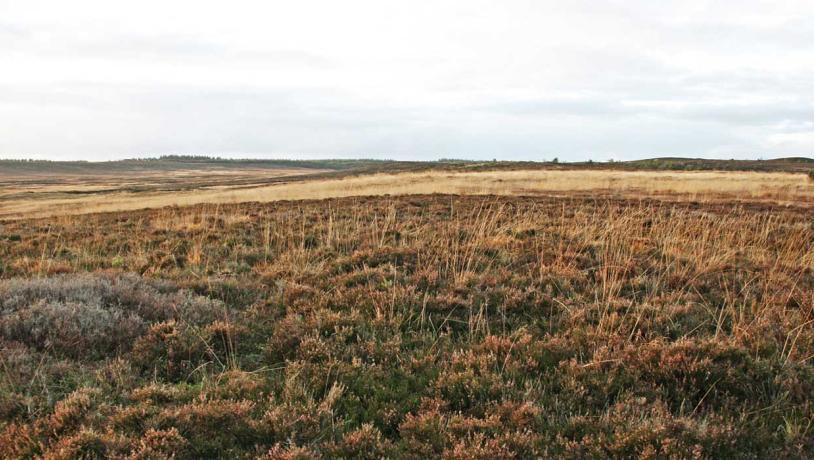 The heathland of Nørre Vosborg Hede is an open landscape that gives a good impression of a hill island (Figure 34-3). During the periglacial environment that affected the area during the Weichselian glaciation the hill island was flattened-out by soil creep and other periglacial processes. Sandfær Hede is a smaller area of heathland with parabolic sand dunes. These lie on glacial deposits, and it was previously possible to see large stones under the wind-blown sand. The boulders represent glacial erratics deposited during the Middle Weichselian or the Saalian. The heathland extends northeast to river Lilleå where there are low-lying meadowlands.

Information about the entire Stråsø Plantage area, including the three heathlands, is well-presented by the Danish Nature Agency (home page, folders) and there is an extensive system of paths. The geological value of the area lies primarily in the open areas where features, including sand dunes and hilly glacial landscapes, can clearly be seen. The area is included in National Geological Interest area (NGI) 77 (Skovbjerg hill island) and NGI 77-9 (Sønder Vosborg Hede) and has been identified as a “Valuable geological area”.  Sønder Vosborg Hede has been nominated as a Natura 2000 site. Parts of the area have been protected.

It is important that the area does not become vegetated so that the landscape forms remain clearly visible. The Danish Nature Agency maintains the heathland by clearing trees, cutting grass, controlled burning, fencing and grazing.

The area has been thinly populated since the Middle Ages. There have been a few, but individually large, farms and wide areas have belonged to estates (including Nordre Vosborg). On Sandfær Hede there is a branching system of rutted roads that lead to an old ford across river Lilleå. There are impressive barrows on the highest part of Nørre Vosborg Hede.