Skibsted Fjord - Kås Bredning is a coastal area that comprises the northern coast of Thyholm (Skibsted Fjord) and the north and east coasts of the island Jegindø (Kås Bredning) (Figure 36-1). The geological value of this site is the wide variety of coastal types that are present within a relatively small area (Figure 36-1). 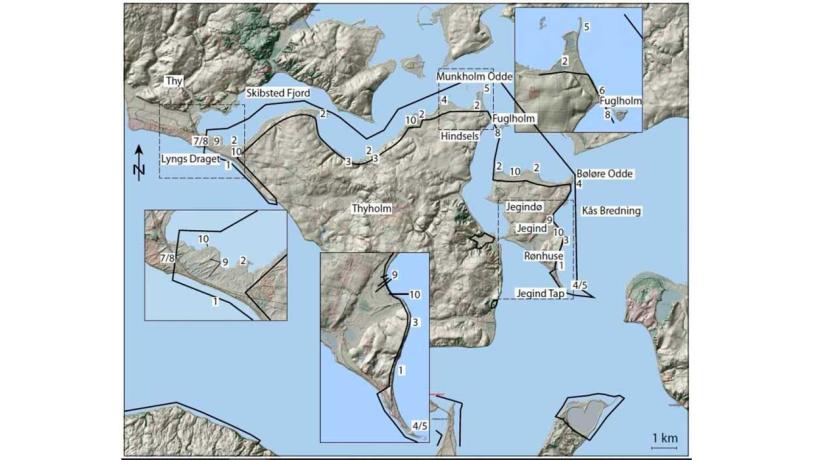 In contrast to the west coast (site 37 The West Coast), which is a simplification coast, the inland sea Limfjord has a wide variety of coastal types. This is mainly due to the irregularly-shaped coastline that gives a wide variety of stretches of open water and thereby different degrees of exposure to wave action. The Skibsted Fjord - Kås Bredning area comprises more or less all of the coastal types found in Denmark. There is everything from dynamic simplification coasts and cliff coasts to placid tidal meadow coasts. In addition there is a variety of coastal forms including spits (both straight and recurved), cuspate forelands, tombolas, isthmuses, beach ridges and beach lakes. There are numerous small bays and inlets and many small islands and islets. 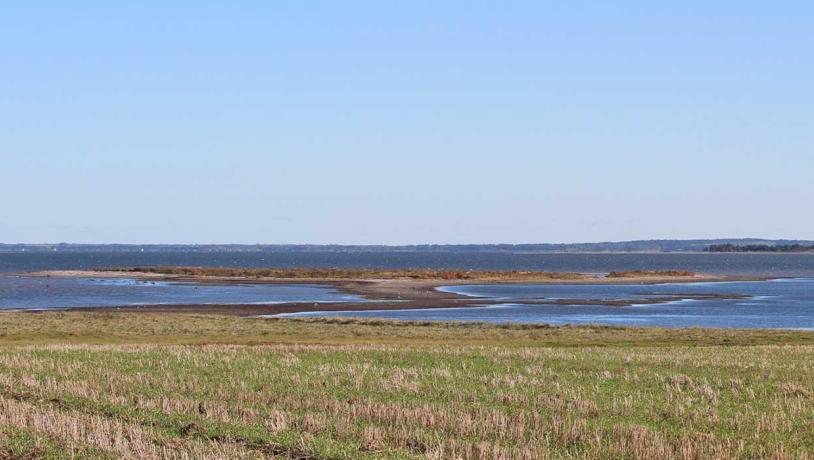 Similar to site 29 (Veserne-Engbjerg-Plet) the landscape was influenced by the marked changes in sea level that took place in postglacial time. During the Atlantic period (9.000-6.0000 years ago), sea level was about 2 m higher than today, and marine foreland has developed throughout the entire area. The marine foreland borders on glacial landscapes and in some places cliffs have formed in the glacial sediments.

The coastline is presented below with focus on the different types and forms that are encountered in the area. Each coastal type and form is given a number that can be found on the locality map. If a type or form is present at a different locality, reference is made to the latter. 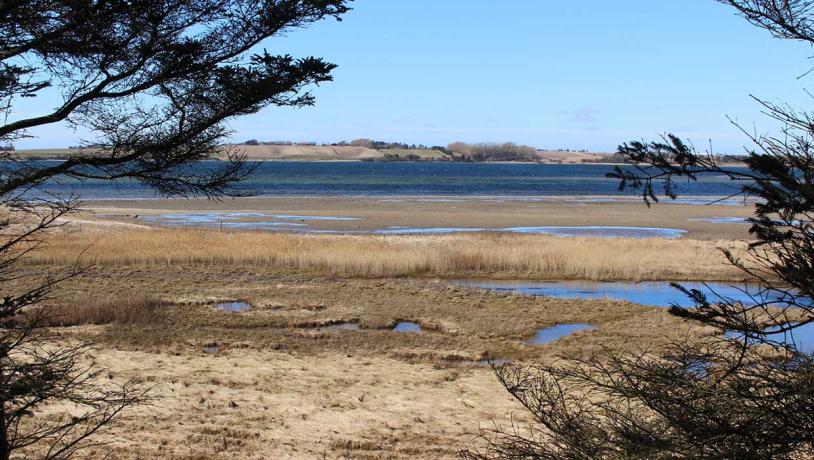 1. Simplification coast. There is a good example of this type of coast at Lyngs Drag that connects Thyholm to Thy in the extreme western part of the area. The coast here is exposed to the aggressive action of waves because of the dominant westerly winds and the large stretch of open water in Nissum Bredning. Skibsted Fjord used to be open to the west, but it became closed as a result of the deposition of sediments transported along this coast. Another good example is the east coast of the island Jegindø. The grandest example of a simplification coast in GPWJ is on the west coast of Jutland (site 37 The West Coast).

2. Tidal meadows. There are large stretches of tidal meadowlands on the northern coasts of Thyholm and Jegindø. In contrast to, for example, the west coast of Thyholm, these coasts are relatively protected from wave action. The calm conditions have allowed salt- and water-tolerant plants to become established in the coastal regions (Figure 36-3). Fine-grained material is deposited under high water conditions when the vegetation is flooded. Repeated flooding results in the expansion of the tidal meadow area because of the added material and new plant growth. There are many tidal meadowlands in the geopark (e.g. sites 39 Oddesund, 40 Gjellerodde and 30 Sønder Lem Vig - Geddal Enge).

3. Cliffs. There is an active cliff on Jegindø island, north of Rønhuse. This stretch of coast is part of the simplification coast mentioned above. There are a couple of inactive cliffs on the north coast of Thyholm behind a narrow belt of marine foreland. Much more marked cliffs occur elsewhere in the geopark at, for example, Bovbjerg (site 1), Toftum Bjerge (site 6) and Odby Klint (site 42).

4. Recurved spits. There are several recurved spits along the north coast of Thyholm. A particularly fine example is at Bøløre Odde in the extreme north of Jegindø island. Other examples in the geopark are at, for example, sites 39 (Oddesund) and 40 (Gjellerodde).

5. Straight spits are common on the north coast of Thyholm. A very good example is Munkholm Odde at the northeast extremity of Thyholm. Jegind Tap at the southern end of Jegindø island (Figure 36-4) used to be a straight spit but it has developed extensively towards the east and has now become a recurved spit. There are other examples of straight spits in the geopark at, for example, Oddesund (site 39) and Venø - Nørskov Vig (site 41).

6. Cuspate foreland. A good example of this type of coastal formation is in northern Thyholm opposite the small island of Fuglholm. Larger examples occur elsewhere in the geopark (e.g. sites 41 - Venø - Nørskov Vig and 40 - Gjellerodde).

7. Isthmus. An isthmus is a narrow strip of land that connects two otherwise separate areas of land. The best example here is, as mentioned above, Lyngs Drag that connects Thyholm and Thy.

8. Tombolo. This is a kind of isthmus that links an island with the mainland. The little island of Fuglholm is connected to the northeast coast of Thyholm by a good example of a tombolo (Figure 36-2). Lyngs Drag, that links Thyholm and Thy, is a tombola if Thyholm is considered to be an island.

9. Beach ridges. These ridges, that develop parallel with the coastline, consist of coarse-grained deposits and are found high up on the beach or on the marine foreland just behind the beach (Figure 36-4). They are formed in stormy weather with onshore winds in connection with high water levels. A splendid example occurs at Lyngs Drag where the lines of beach ridges clearly indicate how the coast has been built towards the south as a series of spits. There is also a series of beach ridges that make up an area near Jegind on the island of Jegindø. Here the parallel ridges mark the construction of the coast in step with the relative elevation of the land since the Littorina transgression. Beach ridges occur at many other places in the geopark, including sites 39 (Oddesund) and 40 (Gjellerodde).

10. Beach lakes develop when, for example, a bay becomes enclosed by the growth of a spit, as can be seen at, for example, sites 21 (Gjellerodde) and 41 (Venø-Nørskov Vig). They can also develop in tidal meadowlands.  There are many examples of both types of beach lake in the present area. 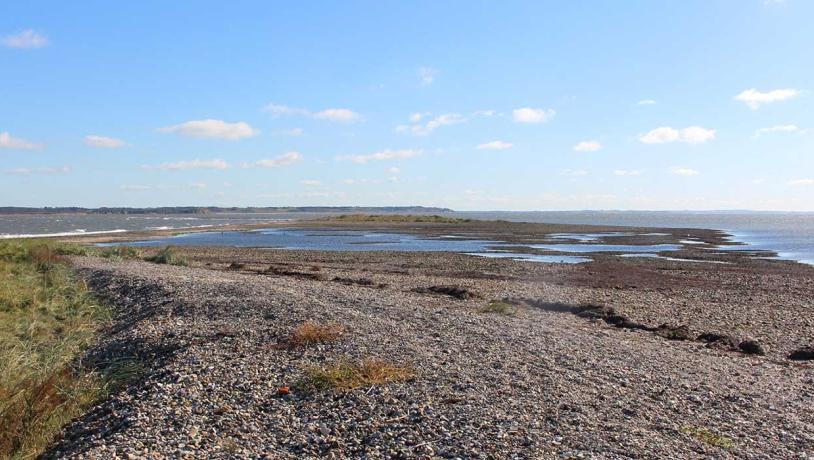 The Skibsted Fjord - Kås Bredning area is very valuable from a biological point of view because of the extensive area of tidal meadows and the shallow water. These are important feeding areas for many species of birds, as well as seals. The area is relatively unpopulated and undisturbed by human activity. It is a Natura 2000 bird habitat and protection site. It is also a nature reserve, and Skibsted Fjord is a preserved area. The area has been nominated as a National Coastal Landscape (NK 87 Kås Bredning - Skibsted Fjord).

The tidal meadows have been grazed and the area has long provided the basis for cattle breeding and trading, for example at the manor house Hindsels in the northern part of Thyholm. Kås Bredning and Skibsteds Fjord have been important for fishing through the years. Access to the exciting coasts is possible at many places. Because of the vital biological interests in the area, the choice of geopark information sites must be made with great care.