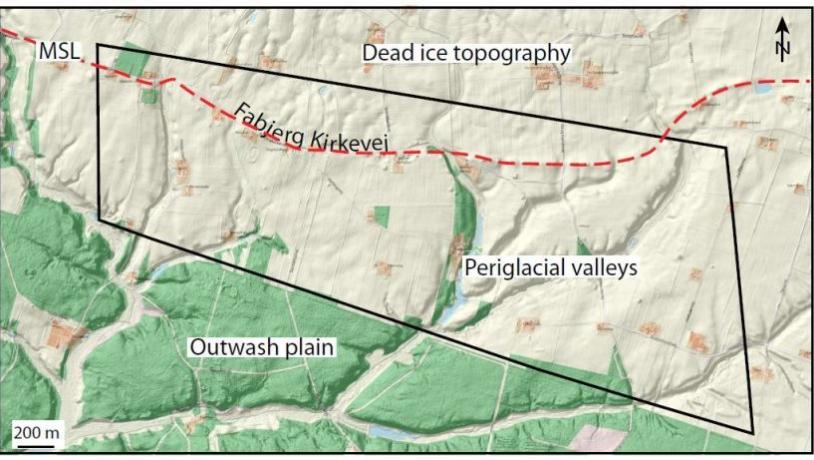 This locality lies just north of Klosterhede heathland and between the towns of Lemvig and Struer (Figure 3-1). It comprises a roughly 700 m broad belt that stretches from Fabjerg church for about 3 km to the east along the road Fabjergkirkevej, and then for a further 500 m to the east. To the north this site abuts site 18 Nørre Nissum - Fabjerg and to the south it is adjacent to site 20 Klosterhede – Kronhede. The locality is a good example of the kind of landscapes developed along the MSL. This line marks the maximum extent of the Scandinavian Ice Sheet 23.000-21.000 years ago and is a boundary between two markedly different types of landscape. North of the MSL is a hilly dead ice landscape that formed when the ice retreated from its maximum position. To the south the landscape is dominated by extensive outwash plains formed when the ice was melting, as well as hill islands that are remnants of glacial landscapes from the Middle Weichselian or Saalian.

North of Fabjergkirkevej road there is a gently undulating moraine surface in which the difference in relief between the low hilltops and the floors of the depressions is about 5 m. See also site 18 Nørre Nissum - Fabjerg. It represents a typical example of a dead ice landscape developed when the Scandinavian Ice Sheet retreated from its maximum position. South of the road there is an outwash plain with a smooth surface that dips gently to the south (see also site 20 Klosterhede - Kronhede). The smooth surface is locally disturbed by incised valleys. The boundary between the undulating moraine surface and the flat outwash plain is expressed by a slight change in topography with a fall of about 5 m over a distance of about 500 m. The site is an example of the fact that the MSL is locally only weakly expressed in the landscape. Despite the different types of landscape on either side of the MSL, its detailed location can be difficult to appreciate in the field.

Figure 3-3: Fabjergkirkevej road at Saugmandsvej road. The gentle rise in the terrain indicates the MSL. From here to Fabjerg church in the background the ridge follows the MSL.. This was the route of the ancient road. The terrain slopes down to the left towards the outwash plain.

In the western part of the site the MSL is defined by a change in soil type from moraine clay in the north to meltwater sand to the south.  In the eastern part of the locality the MSL is more difficult to locate on the basis of the underlying soil because both the outwash plain and the moraine consist of sandy deposits. The MSL is cut by several streams that flow southwards and drain the moraine landscape towards the outwash plain. The water courses in the moraine surface are small and form shallow valleys. The valleys spread out on the outwash plain and the streams erode deeper channels. These periglacial valleys were formed in late glacial times when the ground was still frozen and bare of vegetation. In the south-east corner of the site at Gudumlund there is an example of a dry valley that was carved out during late glacial times. 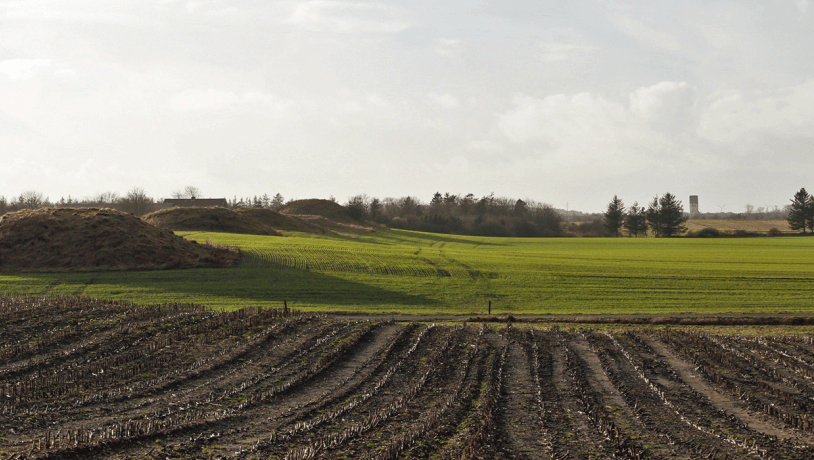 The church and the barrows in the area are preserved. The old road is a cultural heritage item. Between Fabjerg church towards Saugmansvej road in the east the road follows the MSL (Figure 3-2, 3-3). The prehistoric road followed this route along which there are several rows of barrows. Despite the weak topographic expression of the MSL here it is not coincidental that the old road is located here. This route avoids the deeply eroded valleys in the outwash plain to the south and the more hilly moraine landscape to the north, and is the easiest way through the area. The many barrows, the church and the remains of the prehistoric road represent a good example of the link between the landscape and cultural history over several thousand years.